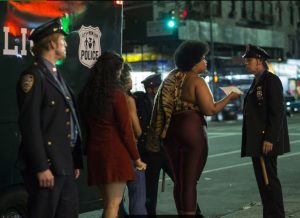 Already approved for another season, the Deuce continues to amaze audiences and we are only two episodes into it. Bringing light to the grimy streets of 1970s NYC, so far we have been submersed in the popularity of pimping and prostitution.  With this episode, we see women working the streets and trying to find a way to work more money into their pockets.  When you have a pimp taking part of the cut, it doesn’t leave you with much.

You could argue the main point of this episode, “Show and Prove,” was for women to show up and prove they could do it for themselves.  In the time when prostitutes were routinely arrested, they would be given a ticket or voucher giving them a grace period before being arrested again.  Lasting a couple days, perhaps law enforcement believed it would put fear into newcomers and the cooling off period would persuade them to see the light and renounce the job.  Unfortunately, having little to any other escape methods, the police found more routine in that venture for the sex workers than anything enlightening. 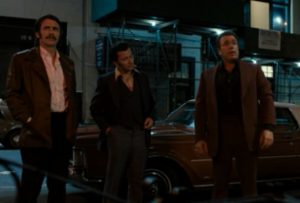 I found the story behind Vinnie’s (James Franco) new business venturing confusing. I’m still not entirely certain what his business with his brother-in-law (Chris Bauer) and Rudy Pipilo (Michael Rispoli) gets him. I think maybe it is to work off his twin brother Frankie’s debts, but I am not sure. I suppose we will get more light on the situation as it moves forward. So far Vinnie feels like a small outcast or pitiful side character. I am making the grand assumption that besides knowing the pimps and prostitutes, he will eventually work with them regarding the birth of the pornography industry, but if he doesn’t then it makes me question his place in the story at all. Same goes for Abby (Margarita Levieva) who has given up on college and intends to make it in the city. Bunking at a friend’s we see her perusing want ads for a job. How long before sex work reels her into its tangled web?

“Candy” or Eileen (Maggie Gyllenhaal) as we find out is really her first name, is easily my favorite character and you could say the feminist figurehead of the series. Everything so far is incredibly characteristic of the time in regards to treatment of women, but it was also the time of the emergence of feminism, so it is not out of the ordinary to have a character be a sex worker but also a feminist.  She makes the point quickly in the first episode and continues to do so here, that the only person making money off her body is her. So not only is she free of the influence of a pimp, which is a step ahead of the rest, but she also finds herself in a porn film and quickly takes interest in what it takes to make one. This is woman thinking of how best to take care of herself, but also how best to take care of her kid. Candy is going to show up and prove she can handle it herself. And be an inspiration for other women trying to get out of the game. 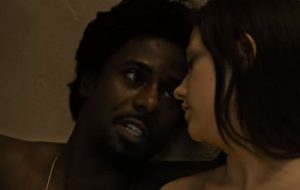 Because going legit isn’t just about finding a different job and being able to support yourself, it is about escaping an abuser who would likely hunt you down and kill you for leaving. Pimps, as so shown, are notoriously protective of the prostitute property.  Any woman trying to leave is going to have to go far enough away, or if she stays in New York, she’s gonna have to change her name. If her pimp finds her, he will kill her.  The duality of the pimp was I felt an out of place characterization in this episode.  At the end of the pilot, we see CC (Gary Carr) rough up his girl Ashley (Jamie Neumann) when she doesn’t want to work in the downpour.  But in this episode, he opens himself up to Lori (Emily Meade) about the kind of life he wants for himself, but how he needs the money first. Pimp with a heart of gold, right?

Another character that hustles to keep afloat, is Darlene. We slip in this bonus clip that highlights that she’s doing alright, straight from the actress who plays her.

As the show moves forward, I’m interested to see how the characters will continue to develop. How far will Candy go for herself?  What role will film and pornography have moving forward?  Will there be a Linda Lovelace cameo of some kind (please!)?  How will Vinnie handle his brother’s debts?  And what happens if he can’t pay them?  Whether all these questions will be answered this season or not is up for speculation, but it is a comfort to know we will have another season at least to continue exploring the seedy underbelly of sex and the 70s.

Here is a tease for what we can expect in Episode # 3. Don’t forget THE DEUCE Sunday night at 9:00pm.