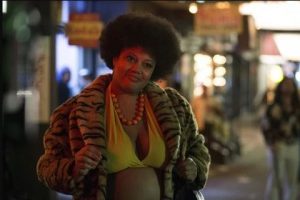 Business is good. Money is pouring in. Rudy, Vinnie, Bobby and Frankie are making large wads of cash from the parlor plus the new investment of the private viewing chambers. Life is good on the street for these guys. Eileen tags along with Harvey and continues to meet some of the muscle and money behind the adult movies and viewing chambers. She also gets to be in back of the camera, learning the various 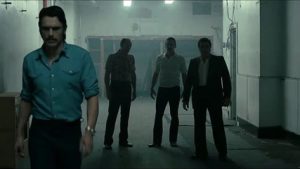 facets of the adult film industry – which is a sense of empowerment, considering what she used to do for a living (no judgement, I’m just happy that she’s starting to get an on the job education that doesn’t require her getting beaten or robbed). We also learn that she has a brother – and a few episodes ago, when Eileen’s mother angrily said, “When was the last time you went to visit him?” I had to wonder why we hadn’t heard about her sibling – and two scenarios came to mind: he was either a severe drug addict or a homosexual and the father didn’t want that around in his house or his life. So, life seems better for Eileen also.

The pimps, however, continue to look like they’re losing control, credibility and power. This especially comes into play when CC chats it up with a former mentor and ex-pimp, Ace. Ace tells CC that the moment these booths were made available, was the moment that anyone could spend money on anything to do with sex and the pimp really is pushed to the sidelines, with no protection and no power. Larry attempts to keep busy by getting involved with some shady drugs deals. Or what appears to be some sort of business arrangement. 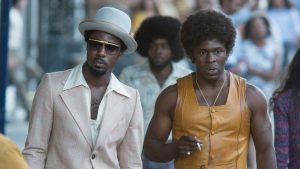 The one thing that continues to stay the same is that the prostitutes are still the ones doing the bulk of the work and other people exploit and profit off of them. And some business arrangements, while profitable, are not fruitful. Vinnie is seemingly upset about his family’s involvement with the parlors, the viewing booths and the prostitutes. Vinnie just wants to do his thing at the Hi Hat, while trying to carve out a relationship with Abby. An open, but mutually satisfying one. Hey, whatever works?

Abby – for her part – brings some new flavor to the Hi Hat: live music. What goes well with drinks at a bar? Music. It’s enough to make Vinnie offer her and Paul in on some of the money made. Things look up for those three. Vinnie receives word that his ex-wife was beaten up by some wannabe thug named Eddie Bucco. Walking into a pool hall, Vinnie exacts some serious old-school revenge, while Tommy Longo looks on. 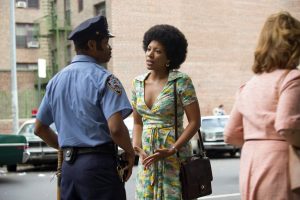 As for Alston and Sandra, we knew that no matter what kind of expose she had and no matter how explosive it was going to be – without legal documents, a paper trail or a string of credible witnesses who are willing to be named – her news scoop was going to be kept under wraps. This obviously takes a toll on their relationship. Alston can’t afford to lose his job, nor does he want to be seen as a rat. Too bad his partner Flanagan is such a jackass who has no qualms about ratting out his partner. Flanagan is a scum bag and I guess it’s each cop for themselves.

The worst part of the season finale is what happens to Ruby, aka, Thunder Thighs. While Eileen and Harvey are on their way to a premiere party for an adult movie, Eileen sees her friend on the streets, working. Sadly, this will be the final time Eileen sees Ruby. While some women are fortunate enough, through whatever means possible, to get out of the prostitution trade, Ruby was not one of them. In a horrifying end, Ruby is violently pushed out a window, after some john gets violent with her, being a degrading jerk and wanting his money back. This moment was a violent reminder of the daily threat these women endured. Looking at her lifeless body, exposed for all the bystanders to see, made me upset. No wonder Abby was upset. But that’s life on the streets. It’s dicey. It’s problematic. Drugs, violence and sex go hand in hand because as Vincent says, “It’s the Deuce.”

It is all in the ebb and flow of life on the city streets. Somedays it can be going well but then it can turn bad real quick. Such is The Deuce!  We have to wait until Season Two to see how it evolves.