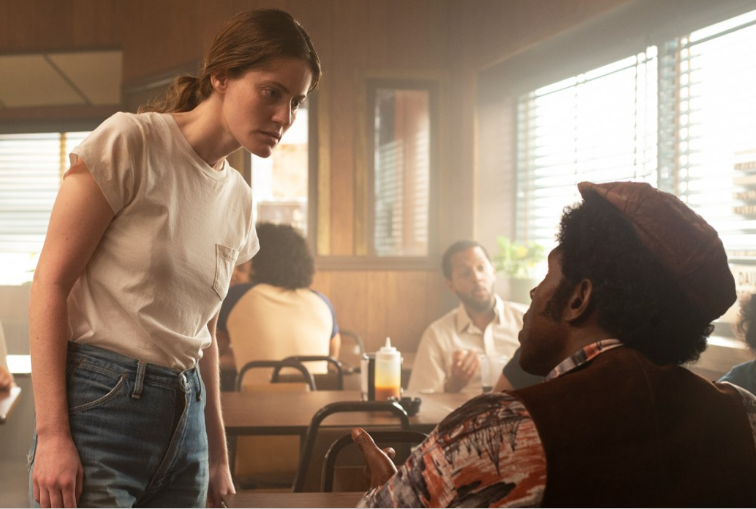 Pretty ironic episode title, when you think about just how much hurt and pain some of these characters have endured. Coming close to the end of the season, we witness a few surprises and additional suffering for many of our folks who walk the Deuce. Remember Barbara, the prostitute who got arrested doing a deal for Larry? Remember Larry, who used to be a straight up, hard ass pimp? Well, Barbara returns to the Deuce and Larry is, quite frankly, stunned to see her. I guess he thought she’d be there for a long time. I guess he didn’t bother to visit or write letters to her. As for Barbara, she looks awful; I’m sure life in prison is no cakewalk and she’s been holding onto a lot of anger until the day she walked – until the day she could give Larry a piece of her mind. After seeing him at the diner, boy, does she ever let him know what she thinks of him. Barbara wastes no time in confronting Larry and Darlene. She leaves in a huff but can you really blame her?

We move on to find that Ashley has really been ramping up her social activism and it’s creating a really bad environment; it’s one thing to be passionate, but it’s another to really fan the flames of anger and resentment to the point where nobody wants to have anything to do with you, especially the prostitutes, who fear reprisal from the pimps. This is the current situation in which Ashley finds herself in. Unfortunately for Ashley, she’s made herself a target among the pimps and that’s not good for any of the work she’s done and the work still ahead of her. Is it worth being assaulted, or worse, killed over? It’s a tough call: Ashley wants to help the prostitutes escape a life of drudgery and assaults; because she knows what it’s like to be powerless. 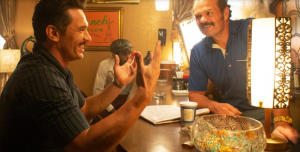 And that awful business about a drive by hit on Vincent, Rudy and Tommy? Oh, it turned out to be a misunderstanding. Um, that’s one heck of a beef to be had – shots ring out; potential injuries and/or death could have been the result and it’s just a misunderstanding?! I don’t pretend to know the first thing of how the mob runs their turf and families but I do know one thing: they seem to be the guys who are untouchable and keep making money off of everyone else’s misery and suffering. It doesn’t look like Vincent and Abby are too happy with each other and they appear to be going through the motions of a relationship that is on the rocks. Vincent takes off to visit his dad – presumably to lament that things aren’t going so well in his life and that all he wanted was a nice life, with a nice girlfriend and the dream of a white picket fence – and his father bluntly reminds him that he DID have a wife and a family at one point and what the hell has he done with his life? Sobering words, indeed. Another interesting item to note: it’s mob boss Matty the Horse AND Rudy who happen to go into a business venture together – they become involved with Lori’s burgeoning film career and they erase the debt to CC entirely. Like this is going to go over real well with CC, who has obvious control issues, due to his lack of power and non-descriptive role.

Some people continue to flounder and  just spiral out of control. Rodney and Shay have become addicted to heroin. Any kind of addiction is bad enough, especially if you have no supports to help you stay sober and focused. We’ve seen how the prostitutes become drug addicts and how difficult it is to stop using drugs. You just know it’s going to get worse for those two before it gets better. 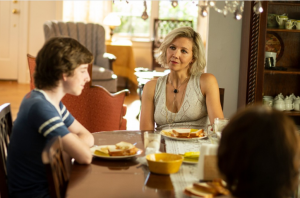 Candy appears to be one character that’s doing okay – at the moment. She’s got to contend with the mob bosses wanting to interfere with the media aspect of the movie campaign (over-sexualizing Lori’s Little Red image on posters, trying to make Larry white instead of black). Candy wants to make a name for herself and she also wants to have the duality of being a loving mother and have a relationship with her son, but we know that particular aspect of her life isn’t going to end off on a happy note.

And in a disgustingly heinous act, CC commits the worst crime a man can do to a woman: he viciously rapes Lori, because we all know it’s his lack of control and abusive nature that ring true here. What a sick man. It was alright to continually use her for money, to spend money that she earned – he controlled her money – and it was okay for him to mentally and emotionally abuse Lori. No, CC, like all other criminals and psychopaths, you’re going to get a serious dose of karma come down the pipe. And let’s not forget the sheer arrogance of CC – he thinks he’s such a hustler that he can actually demand money from Frankie (and Bobby) because Frankie was a producer and so naturally, he threatens them. And guess what? People got sick and tired and fed right up with CC. In the end, he totally got what he deserved (for years of abusing his girls and being a real arrogant jerk) and I really don’t think anyone is going to miss him, let alone lose a wink of sleep over CC. Good riddance.

The Martino brothers and their brother-in-law are way in over their heads. Debts, mob ties, threats, attempted drive by shootings and murder – how can you ever really recover from these sorts of sordid events? What’s going to happen to them in the finale? In fact, a lot of folks at the Deuce are having a bad time as of late – isn’t anyone going to have a happy ending? And what does a happy ending even look like while living on the streets of the Deuce? That covers most of our key players. Only the season finale to go. Check back.