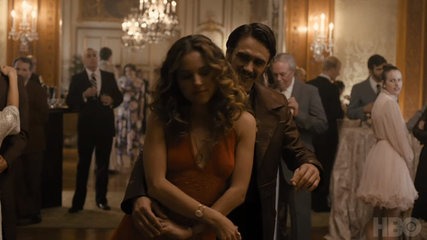 Au Revoir – French for ‘goodbye’ – is a dominant theme in this episode, but I don’t know if the title is a play on that or not, but I’m sticking with it. Saying goodbye to a life that you were eager to get rid of; getting rid of societal expectations; trying to improve your life or the women of the Deuce supporting each other and trying to diminish the patriarchal chains is what really struck me. About time, too. Go on, girls, smash that damn patriarchy. This episode detailed a lot of the backstory of how pornography really became mainstream in New York. In actuality, the credit goes to a gay adult film that was made – and was apparently very popular at the time. You could say that this particular film paved the way for the burgeoning adult film industry of the 1970s.

Eileen has brought Lori on board to the film business. I didn’t understand all the technical aspects of filmmaking – but this episode shows Eileen with a creative light; she focuses her energy on the décor, the cast and the positions; and bringing to light how adult films can actually showcase female pleasure. Lori, for her part, is unsure and insecure about her foray into the adult film business. It’s almost as if Eileen is mentoring Lori, while Eileen herself is looking to capitalize on various roles in front of and behind the camera. Even though we see Eileen having to go back to prostitution temporarily – albeit in a classier environment (high-class hotel, rich john) – I hope that Eileen will become a master of the film craft. Having a good skill set makes you adaptable.

Ashley continues a steep decline in being demoralized and not caring anymore; you see the beaten look on her face when she’s dropped off in front of the massage parlor. Darlene looks like she’s getting by with the new change of pace and scenery; if you think about it – being inside is a lot safer than being outside in the cold, rain or snow. Ashley decides that’s it and blows the massage parlor off completely and ends up to the Hi-Hat (and after watching a male adult film) sleeping with Frankie. We all know that’s going nowhere, as both these characters have no roots anywhere. Frankie just dumps Ashley off at Abby’s. Nice, Frankie, classy. 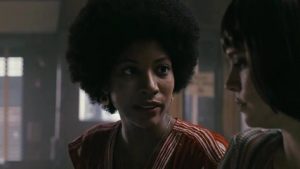 While the masseuse parlor works out for some of the girls, it certainly doesn’t work out for others and tension mounts. Thunder Thighs points out that while the rest of the girls have to earn their pay on the clock, one girl has just been hanging out at the bar with Bobby. A little favoritism on Bobby’s part is going to be bad for business. However, want to know what else is bad for business? Ladies who overdose on drugs and additional police payouts. Yes! Police corruption is widespread and all over the place. The police have cracked down on the street life to the point where there aren’t any more prostitutes on the street. While the trade has moved indoors, it means that the police have to be paid a fee to keep quiet and turn a blind eye. With all these payoffs taking place, will there be any actual profit in this massage parlor business? I think Bobby has bitten off more than he can chew with this sideline.

So, Alston and Sandra have hooked up. She has good intentions in wanting to expose all the horrible things about being a prostitute and showing how vile pimps really are. This is yet another example of a woman who has good intentions in wanting to better the circumstances of these destitute women. A new commanding officer has been assigned to the precinct and has taken a keen eye to police officer Alston. Over the course of a car ride, we find out that Alston has been singled out by the new CO because he could be one of the few trustworthy cops in the force and may be a source of information which could prove useful down the road.

Abby continues to cross lines by bringing Vinnie to some high society soiree and push her parents to their limits. It’s clear that Abby has dressed the way she has and brought Vinnie along to get under her parents’ skin and override her father’s expectations of what she should be. The only person who’s deciding Abby’s future is Abby. Good. I hope she continues to grow a pair and become self-sufficient. I love the fact she took her father’s check and gave the money to Ashley, acknowledging that her life has been hard; it’s going to help Ashley get the hell out of New York. (Well, here’s hoping she finds a sense of normalcy or peace far from the streets).

But can we talk about the unsung hero – the line cook from the diner?! That man has seen his share of prostitutes come through his establishment but clearly, even the nicest, most patient or laid back people have a breaking point. After seeing how one jackass of a pimp treated his ‘property’ – well, that was game over. And let’s just say that I wasn’t shedding any tears over that abusive pimp because he was a monster. Anyone who makes their living off the exploitation and degradation of others is the lowest of the low. Other good people, besides that cook, seem to be Sandra and Alston. So, here is a bit more about them from the actors who play them.

Let us also have writer George Pelecanos talk up some particulars on the episode.

Finally here is a look at the final episode of Season One.