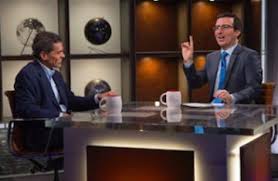 Since there is no new edition of LAST WEEK TONIGHT this Memorial Day weekend I decided to take John Oliver up on his offer from his last show to check out the Web exclusive he was presenting with Fareed Zakaria. Then I thought why watch it alone so I will share that interview with you a bit lower in the post. Now I know you don’t give a rat’s ass about the elections in India and you may not even care who the hell Mr. Zakaria is, but John and Fareed make a pretty funny pair here. For those who don’t know who he is Mr. Z. is an expert on foreign policy and international affairs and not only appears on CNN but is a producer and consultant for VICE (which is where I know him from). He is not a comedian by any means, but holds his own with Oliver.

His reason for being on the show on 05.18 was because John Oliver has been fascinated with the India election for its Prime Minister. He reported about it on Episode One and returned to it this past week with the following report.

You did catch a glimpse of “Weather In Westeros”, right? And that was not the only clip of the nigh; he also trounced on GM for its recall woes as well.  Check out the commercial which exists according to Deadline because critics complain that viewers need a rest from the Oliver offensive and so this type of diversion is the solution.

Okay, if you are still with me and are enjoying snippets of LAST WEEK TONIGHT here is that Web Exclusive with Fareed Zakaria.It is informative and amusing.  Enjoy it and we will revist John Oliver in June.