Scored by an ominous piano/violin concerto, each episode of Succession cold starts with the juxtaposition of contemporary Manhattan (the best NY skyline cinematography since 1987’s Working Girl) and footage of the Roy family’s home videos. This opening sequence sets the precedence for the interpersonally dysfunctional yet professionally competent exploits of the Manhattan-based Roy family. I am slightly perplexed why this gold-standard block of programming has not gained significant viewership. Fortunately, the quality-minded executives of Home Box Office are equally concerned with the strengthening of the brand, as they are with immediate viewership numbers. With only one episode into this new season, it is apparent that Succession will be one of HBO’s most memorable non-fantasy/sci-fi dramas.

The Season 1 finale’ of Succession continues to burn in the memory of premium cable watchers, as one of the most profound television season conclusions of the 2010s.  The backdrop was a wedding of an unequally yoked bride and groom; which also featured a disastrous commercial rocket launch, and a deadly drug-induced joy-ride for more drugs. How do the showrunners keep this intensity up, without stuffing the storyline with overwrought material?  The answer lies in the cast and crew’s ability to have the audience to sympathize with characters that represent the 1% of society.</span

Helmed by Mark Mylod, the director of the final episode of season 1 (and GoT regular), the Season 2 premiere begins with Kendall Roy at a luxurious substance abuse rehabilitation center. Kendall’s spa day is abruptly interrupted by messengers sent by his father, Logan Roy. He is given a pressed suit and a brief-briefing upon arrival to a news station.  The intended outcome is to explain why Kendall pulled out of a deal to sell the family business to a rival, vice backing a plan to a father that finds him empirically incompetent. The explanation is painful to watch, we see a man that is physically displaying the signs of narcotics withdrawal, 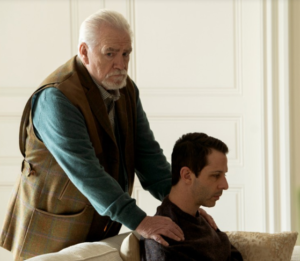 attempting to explain why one of the most lucrative business deals in recent memories suddenly evaporated. However, the broken man manages to close the interview with a humorous yet profound statement on the resilience of his father. Watching the situation unfold in real-time with the board of directors, Logan Roy states “Ladies and gentlemen, the first fucking thing my son had done right in his life.”

Viewers of the first season are fully cognizant that Logan Roy has Kendall by the jugular and balls, with the latter avoiding manslaughter charges at the expense and power of the former. Furthermore, Kendall Roy is not close to being rehabilitated. In one despondent yet hilarious scene, Kendall responds to a reluctant and naive drug supplier (cousin Greg), who was unable to retrieve high-quality narcotics: “You brought me city park coke?” But this is just one of the events of the first season that is a meniscus of discord that is waiting to spill over.  Roman Roy, the youngest son and most unfiltered of the family, is battling severe fallout from a rushed satellite launch that killed several technicians. Shiv Roy is still contemplating her future with the family business, while still questioning why she went ahead with marriage to a man that she cares for but does not love. Shiv is later offered something that she did not realize she ever wanted.

Perhaps Succession works so well because it creates scenarios where seemingly non-relatable characters are simply experiencing life’s normal cadences, albeit at a more grandiose level. At one of the Roy’s suburban Manhattan homes, the patriarch scheduled a family dinner to discuss the future of the company. This is interrupted by the disgustingly comical discovery of a bag full of dead raccoons stuffed in the living room chimney. The smell is so rancid, that the surf and turf dinner is completely discarded in favor of franchise delivered pizza. The unsanitary gift was left by an angry contractor that felt he was underpaid for renovation work.  I can hardly relate to this WASP family in any regard, but Logan Roy’s f-bomb loaded retort and threatening of legal action is totally warranted in my eyes After the air clears of the stench of rotting rodents, Logan Roy secretly tells Shiv that he wants her to eventually take over the company. The shocked daughter tearfully accepts but is given the caveat that this remains under wraps for the time being.

The previews of the next episode reveal something quite enticing. A capable Presidential candidate is attempting to court Shiv into a potential cabinet position. If this candidate secures the nomination, would the one person that Logan Roy trusts to lead the family conglomerate, forgo all of this to work on Pennsylvania Ave? This is the dichotomy of the Roys. Don’t miss SUCCESSION Sunday nights at 9:00pm and on HBO.Now.Go and HBO On Demand.