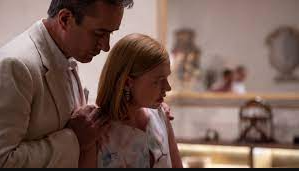 The penultimate episode of HBO’s current Sunday 9pm drama, ended with an aesthetically impressive yet narratively disturbing shot of Kendall Roy, drunkenly passing out facedown in a swimming pool. Previews for this season-ender noticeably omitted Ken. Therefore, many viewers believed this was the end of Ken’s story arc, for he is the most troubled soul out of the dysfunctional Roy family. However, Ken is alive but not-so-well mentally. Emerging from hospital treatment nursing an Italian Gatorade, Ken is able to join his siblings for their mother Caroline’s wedding in the beautiful Tuscany region of Italy. Any television critic worth their salt would note that the formula “HBO + weddings” yields mayhem. All The Bells Say puts all the chips on the table, fully addressing viewer complaints about the anti-climactic conclusion(s) to this season’s FBI raid and DOJ investigation.

Ken, Connor, Roman, Shiv, Greg, Tom, and Willa are involved, in a friendly game of Monopoly. Anyone who has played this Milton-Bradley classic board game knows that Monopoly always leads to cheating. Shiv is caught stealing from Tom’s stash after he excuses himself from the table. This seemingly innocuous act is a snippet of Shiv and Tom’s quid-pro-quo marriage, and a quasi-foreshadowing of the conclusion of All The Bells Say.

A defeated Ken is called to an intervention meeting with his siblings, an encounter that starts verbally hostile. Ken acknowledges his shortcomings but points out his two brother’s and sister’s hypocrisy. SUCCESSION transcends the tv troupe of a lead character acknowledging that they are evil, and instead distillates on the varying levels of evil within its characters. All have been groomed to take the top seat at Waystar, but their father has assessed that none are worthy of taking over his creation.

The intervention concludes with Connor (Alan Ruck) angrily telling his siblings that he loves them but hates their disposition of his place in the family. Connor is the oldest but treated as an outcast, so much that no one has congratulated him on proposing to Willa. After Willa accepts his proposal, Connor is sincerely congratulated by Roman and Shiv, Kendall is not present due to his self-loathing.

Logan, the self-proclaimed man that never loses, has Roman accompany him to consider a business proposal from Gojo CEO and founder Lukas Mattson (Alexander Skarsgård). Mattson knows that a partnership with other companies would hold more potential than with Waystar. Yet, Waystar’s streaming and 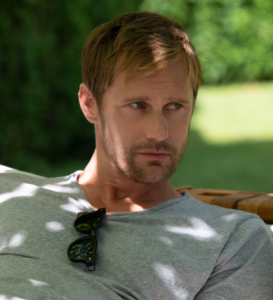 media platforms are still respectable. Thus, Mattson offers to buy Waystar, theoretically creating a conglomerate more powerful than a partnership with another successful company.  Mattson acknowledges Waystar as a dying company and is acutely cognizant that the proud Logan will most likely tell him to fuck off. However, the old man has no viable successors to his empire and agrees to the deal. Logan sends the surprised and somewhat disturbed Roman back to the mainland.

Roman and Shiv pull a totally defeated and initially reluctant Ken into the mix of the future of Waystar. In the series’ most powerful scene to date, Ken confesses his complicity in the accidental drowning of the waiter from Shiv’s wedding. Even Roman (in the most Romanesque way) gives sincere support to his broken brother. Ken, Roman and Shiv remember a clause in Logan’s divorce from their mother that gives the children the collective power to veto the sale of the company. Although he is not present, Ken, Roman, and Shiv make a pact to stop the sale of Waystar, and to give Connor a significant role in their Waystar. Shiv calls Tom so he can formulate a story of Logan’s declining health to be in place after their plan goes through. Big mistake. Recalling Season 1, Shiv and Tom had an unofficial understanding that Shiv would concentrate on politics and Tom would slowly but surely ascend the ladder of Waystar to the top position. Tom has tolerated being thrown into an open marriage, Shiv all but confirmed she does 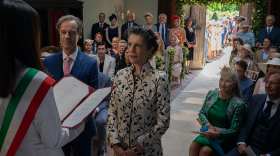 not truly love him and being thrown on the chopping block for the DOJ investigation. It is heavily implied that Tom warns Logan of the Roy children’s plot. Imagine if Julius Caesar had the warning that Brutus and the conspirators were planning his demise, the Ides of March would have read differently in history books. Logan has monetarily and mentally profited from Tom’s unhappiness with Shiv.

Our favorite duo, Tom and Greg capitalize on the situation. Although refusing to divulge details, Tom offers Greg “a seat on the bottom chair of the top of the company.” While Tom admits that Greg will be selling his soul, Greg amusingly responds, “What am I going to do with a soul?  Souls are boring”? Greg is our most passive-aggressive character, even going as far as to drop his most recent crush Comfry, for a mysterious Italian Contessa. 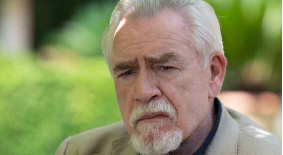 Logan doesn’t spare the rod with his conspiring children and calls his newly married ex-wife Caroline to bear the news: The Logan-Caroline divorce agreement has just been updated to give Logan the majority share of Waystar. All of the decades of tutelage, education and ultimately abuse that the Roy children had undergone to claim the throne is gone.  Shiv eyes through teary eyes Tom being patted on the shoulder after the victorious Logan departs.

Succession Season 3 has an ending profound and satisfying enough to end the series. Season 4 has been green-lit so the Roys will return (probably no earlier than Spring 2023), certainly more bitter and ruthless than ever. Expect Marcia Roy to have a bigger role in Season 4, perhaps the children can leverage her to bring down their father. The only high note for the siblings is that they are together for the first time, a situation that has not been showcased in this series.

What are your thoughts on the Season 3 finale?