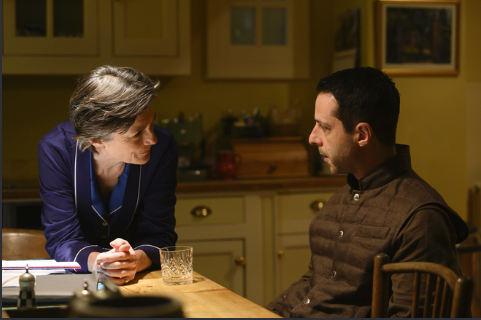 The Wire, Deadwood, In Treatment, and Big Love, have plotlines varying from the dichotomy of lifestyles in inner-city Baltimore, the lawlessness of a South Dakota town in the 1880s, a psychiatrist with his own internal demons, and the tribulations of a slightly disillusioned polygamist family. What do all of these HBO shows have in common? All were critically acclaimed but garnered low viewership. This is also true of HBO’s current Sunday series, Succession. Succession is that low-key crowd-pleaser (albeit a small crowd) that builds the Home Box Office brand. The seventh episode is titled “Return”, and it holds a double meaning for us.  It is not only a return of the Roy family to London to face the ramifications of Kendall’s disastrous drunken joy ride and it is a chance for patriarchal Logan to seek help from his ex-wife who also resides there. His return visit should be good, however,  so little is revealed in this episode, yet so much transpires.

Kendall, Roman, and former Pierce Media member Rhea Jarrell accompany Roy Logan to most destinations on this all-business business trip. Yet, the most tranquil and simultaneously unsettling moment happens with the patriarch and his second-born son. Kendall and his father make peace with the family of the deceased young man that died under the influence of Kendall’s addiction. The accident and stupidity that led up to the tragic event, hit Kendall full force.  Seemingly no lawsuits or criminal charges will come of this, but Kendall’s PTSD will be a factor for the remainder of the series it seems. 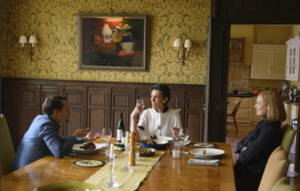 Caroline Collingwood (Harriet Walker, pictured above & at right with the children), is more distant and colder than her ex-husband. Caroline sees her children, less as loveable offspring and more as mediators in a business deal. And with this business deal, in order to sway the stock holding Caroline in their favor, the Roy children successfully make an offer that their mother cannot refuse. Caroline, with a mere 15 minutes of total screen time, has made a more profound impact than Hiam Abbass’s Marcia Roy. Abbass can absolutely deliver in any role, and her underwritten character is my only gripe about this otherwise sound series.

Back in America, Greg and Tom continue to engage in their quid-pro-quo relationship. Greg is confronted by Tom, who threatens to physically hurt Greg if he does not relinquish a cache’ of incriminating documents that were supposed to have been destroyed months ago. It is not this physical threat that causes Greg to eventually acquiesce. It is the threat of informing Logan Roy of his deception (Greg was supposed to have destroyed ALL documents), that causes the 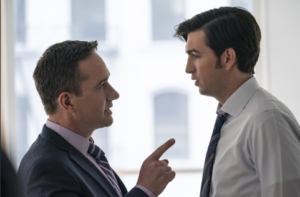 young man to relinquish the forms, and place them on a grill to be burned. However, unbeknownst to Tom, Greg manages to secure a few documents when the former departs briefly to retrieve a working lighter. Out of all of Succession’s characters, Greg has made the largest leaps up the corporate and social ladder. He is paid astronomically less than any other member of the immediate Roy family and the company’s board of directors. Yet, he is now making low six figures and has his own office, and has met new interesting associates, the complete inverse of his previous menial position as a mascot at one of the company’s amusement parks.

“Return” sets up an inevitable showdown between the Roy children and new supposed ally Rhea Jarrell. Rhea shows that the austere Roy Logan can be charmed, and this is much to the chagrin of his children, especially his daughter, Shiv.  Rhea has openly stated that Shiv is not as smart as she thinks, and the remaining three episodes will reveal if this assessment holds water.