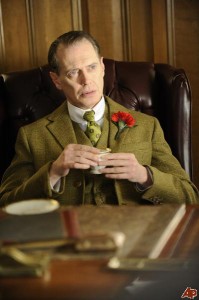 Steve Buscemi better known as “Nicky Thompson” on the jersey shores of Atlantic City, has just won the Golden Globe Award for ‘Best Actor’ for his portrayal of the Prohibition-era gangster.

The show itself also won for ‘Best TV Show – Drama’.  Boardwalk Empire is one of the most expensive programs ever produced for the silver screen.  The show itself received three Golden Globe nominations for it’s premiere season, two of which they’ve already picked up tonight.  It remains to be seen if Kelly McDonald can pick up the best supporting actress nod.

HBO® received 9 nominations to the Golden Globes this year, among them:

* “The Pacific”, for Best TV Movie/Miniseries.

Thats FOUR big wins for HBO this year at the Golden Globes. Congratulations to all of the winners and nominees!