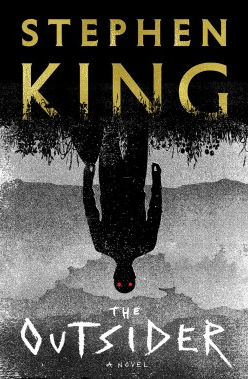 Have you read THE OUTSIDER by the horror master Stephen King? Well, it now has been put into development as an HBO dramatic series and will likely be put on the fast track. At first, the story seems like a familiar plotline as it involves a homicide investigation. Obviously, being a King adaptation, it will not be your typical detective case and not even an epic TRUE DETECTIVE crime.

According to the HBO announcement, it follows a seemingly straightforward investigation into the gruesome murder of a young boy. The crime, however, leads a seasoned cop and an unorthodox investigator to question everything they believe to be real, as an insidious supernatural force edges its way into the case. For a bit more elaboration, here is a blurb from StephenKing.com –

An unspeakable crime. A confounding investigation. At a time when the King brand has never been stronger, he has delivered one of his most unsettling and compulsively readable stories.

An eleven-year-old boy’s violated corpse is found in a town park. Eyewitnesses and fingerprints point unmistakably to one of Flint City’s most popular citizens. He is Terry Maitland, Little League coach, English teacher, husband, and father of two girls. Detective Ralph Anderson, whose son Maitland once coached, orders a quick and very public arrest. Maitland has an alibi, but Anderson and the district attorney soon add DNA evidence to go with the fingerprints and witnesses. Their case seems ironclad.

As the investigation expands and horrifying answers begin to emerge, King’s propulsive story kicks into high gear, generating strong tension and almost unbearable suspense. Terry Maitland seems like a nice guy, but is he wearing another face? When the answer comes, it will shock you as only Stephen King can.

The HBO series will star Ben Mendelsohn (TV’s Bloodline, 1 episode of GIRLS & the upcoming movie Captain Marvel) and produced by him alongside Jason Bateman (Ozark, Game Night). Bateman will also direct the first two episodes. An HBO go-to as a writer for the series will be Richard Price (THE NIGHT OF and THE DEUCE). No more specifics are available but we hope come 2020 we will see this King story onscreen. We will have more as we get it. Are you excited for THE OUTSIDER?