I know we’re a little behind on this one. Some people got busy and needed help, but honestly I’m not sure I was even emotionally prepared to discuss this episode until now. Regardless, we’re here, we’re ready to delve into the final episode of Station Eleven and all the wonder this show has brought us so far. The finale will be no different. Strap yourselves in for the emotional undoing of your life. Well, at least if you’ve been struggling during this pandemic at all, this one is going to just destroy your feels. Can’t wait!

We start with a flashback to little Kiki (Matilda Lawler) with Arthur (Gael Garcia Bernal) and Miranda (Danielle Deadwyler) and how she came to get her copy. Year Twenty, Kirsten (Mackenzie Davis) is ready to blow this airport wide open and make this family recognize everything that went down between them. It took a minute for everyone to realize it was Tyler (Daniel Zovatto) but she wants to make things right. She sits down with Elizabeth (Caitlin FitzGerald) and is so insulted by this lack of willingness to amend. You don’t get anything back from before. There’s so many people Kirsten would wish she could have the chance to fix things with, but we don’t get those moments anymore and for them to throw this opportunity away is such an insult to Kirsten. With Tyler locked up, this is Elizabeth’s moment and she’s throwing it away because why? She’s scared to be vulnerable? Getting them to communicate through the play is amazing, though not surprising Clark (David Wilmot) isn’t immediately on board.

We see a flashback to Clark’s arrival at Severn City with Elizabeth and Tyler (Julian Obradors). He’s back on the phone with Miranda and it made me sad we didn’t get to see more of their dynamic. Their older scenes at the beginning of the show feel like they deserve a rewatch, because their chemistry was fun and they did genuinely care for one another but in a distant-not-great-at-friendship kind of way. He was happy being around her. And she ends up being essential in saving his life, more on that in a bit. Meanwhile, Dr. Jeevan (Himesh Patel) in the house as he arrives for a house call to check Clark’s burns from losing the Museum of Civilization and Sarah (Lori Petty) as well post heart attack. The pass unseen was probably the most frustrating moment of this show as I screamed at my television, “OMFG JUST TURN AROUND SHE’S RIGHT THERE!?! ARE YOU F*CKING KIDDING ME?! WHY ARE YOU DOING THIS TO ME?!?!” I mean, of course they had to do it to us, but sheesh. 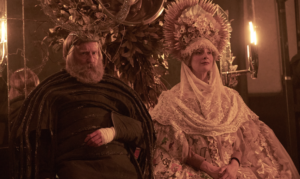 Clark does finally agree to the show, so long as he’s in it. Fair, one last dramatic act for this doddering actor. But it’s this conversation where Clark finally realizes who she is and how long he’s actually known her. The changes to the performance are not completely welcome. I’m not sure why someone with the same name as me would rub me the wrong way so much, but egad I couldn’t stand Alexandra (Philippine Velge). Maybe it was the slightly whiny thing, or feeling like she knows so much about the world when it’s quite the opposite. Or just her and Kirsten even becoming a thing after Kirsten helped raise her. Creepiest trope ever, by the way. Doesn’t get less creepy if they’re both women. Still gross. But she wants off the trail for a year and Kirsten will have to get better at saying goodbyes, as we learned a couple episodes ago.

The play takes off with Tyler as Hamlet and everyone having their key emotional resolutions. There’s still so much love there, but also so much confusion, anger, and self-survival. I really honestly wasn’t sure which way it was going to go. I’m glad it went the way it did, but whew that knife was scary. But once the performance is over, Kirsten has her own reckoning telling everyone Sarah’s gone. Though at least there was a kindly doctor with her when she passed. Undersea are arriving ever since Tyler “lit the beacon” so I’m concerned this could be unpleasant for everyone, though Kirsten does a good job diffusing one kid. There’s also that phone call from Miranda to mention, now seems the time. Her last act was trying to insure the safety of everyone in that airport. She wasn’t going to know how it went down or if the captain would even listen to her. But she tried, and she’s the reason everyone in that airport is alive. Her and Captain Hugo who made sure everyone stayed aboard the plane, and that genuinely must have gotten unpleasant. People in mobs can change the tide of things, not always for the better. But their actions made it a fighting chance for everyone inside and damn, if they didn’t deserve a better end. That sunrise in Malaysia was torture with tears spilling over my eyes. 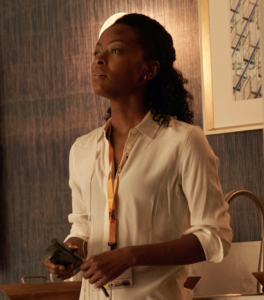 Kirsten convinces the Undersea girl to come with her, though she sneakily snatches her copy of Station Eleven. Which I’ll be salty forever isn’t an actual graphic novel for me to read. But her reemergence with her people results in the best emotional payout of the pandemic: Jeevan and Kirsten reconnecting after 20 years. This show struck chords with people, especially now and the reason is that this show is full of hope. Even when we lose the people that we love, we find our way back. And for the past three years, that’s been a pervasive story arc of our lives. Losing and missing the people that we love. And this show just gave us the hope that we’ll make it out of this okay and find our way back to our people, our families, those we love. Even in the darkest moments of society and civilization, there is still hope. And that’s a show I can get behind. 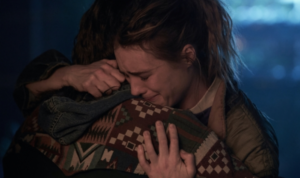 The group starts back on their trail, adding the airport to the wheel for next year, officially breaking the circle. Alex takes off to spread her wings. Good riddance. Elizabeth and Tyler also leave, with his scores of cult children ready to welcome them. That was quite a shot and Clark’s confusion made it all the better. Jeevan explains his life now with his wife Lara (Tattiawna Jones) and their children. He talks about being a parent and how you get mad at your kids but you still love them. He’s learned everything he needs to know, that unfortunately he just didn’t know yet when he was with Kirsten. “You walked her home.” At the end of the day, no matter how they split up, she always loved and respected him for how he cared for her. She knows it wasn’t easy. But she knows she was safe and that was the most important part. Excuse me, I’ll just be dissolving into a puddle over here. Kirsten says he should bring the kids for the performance next year and they prepare to go their separate ways. She really did get better at saying goodbye, especially knowing that it doesn’t mean forever anymore.