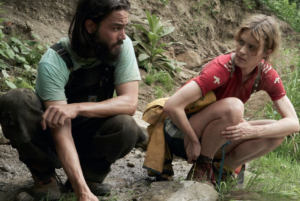 We open on Elizabeth (Caitlin FitzGerald) sitting with the burnt plane, speaking to Tyler (Daniel Zovatto). Little do you know, Elizabeth, you have one heck of a familial reckoning ahead of you. This episode features lots of timeline jumping, something any viewer making it this far in the show will be well familiar with. In our jumping, we learn only 5 copies of Miranda’s (Danielle Deadwyler)  graphic novel were printed, in Chicago on November 28th, 2020. It’s weird to see a date like that which was previously used in a novel, published years before the show would be adapted yet has such significance now purely for being the year 2020, the well-known apocalyptic pandemic year.

We come back to Kirsten (Mackenzie Davis) and Tyler, after the previous episode featured her under the influence of powerful poison and hallucinations. He’s mended her up and they’re ready to make their way to the airport. Clark (David Wilmot) is already regretting agreeing to the show and insists on interrogating the new arriving actors.  Quite a scene they deliver in the Museum of Civilization, drawing of course off of material well familiar to them. And seemingly potentially better than Hamlet in any regard. The random saved stuff in the museum was quite amusing. Whatever they deemed good to inform humanity about, at least Duplos were included.

Flashing back again, we see a younger Clark and Arthur (Gael Garcia Bernal) reconnecting, just weeks before the show. Clark meets Kiki (Matilda Lawler), our young Kirsten. In real time, Kirsten is now putting the pieces together and clicking on who the Prophet really is. That was a humorous moment. Back to Clark and Arthur, they are continuing to reconnect but often what happens is as you start reconnecting, you remember why you fell apart in the first place. To be honest, not the biggest Arthur fan. Which is probably part of how and who his character was written to be. He admits he never cheated on Miranda but c’mon dude, you can see how EVERYONE got that impression, right?! You were so blatantly flirting with Elizabeth. And Clark doesn’t believe you deserved Miranda to which I agree. In the end, you cost them their own friendship because you weren’t getting enough attention. Though I suppose you could argue grown adults who want to be friends would just pick up a phone, but life gets in the way of that sometimes and it’s easier to throw shade at someone else. 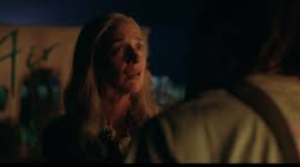 Back in real time, Tyler helps Kirsten reconnect with Sarah (Lori Petty) and get the tissues ready. As one can imagine after losing your love and having a heart attack, Sarah is tired. She’s ready to be done. And she’s right, Kirsten needs to get better at goodbyes. Here’s where to start. Tyler makes sure to announce his proper arrival to everyone at the airport. No one is surprised fire is involved, right? Always with the fire. Little added boom this time though. What could he dish out next? I’m just absolutely in love with this show and have eaten up every emotional minute. The book is most definitely making my “To Be Read” pile and I’m sure the next two episodes will be emotional powerhouses.