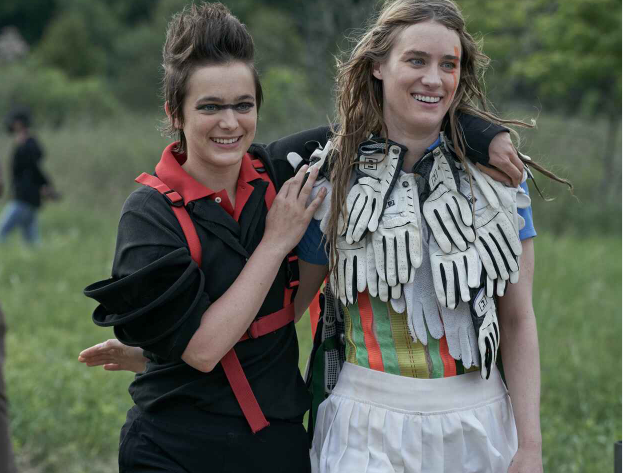 Episode 3 of Station Eleven took a departure, both in time and place, from its focus on Kirsten and the post-pandemic times, in order to get a closer look at Miranda during the years that preceded the pandemic. Episode 3 was, in many ways, a story of love and grief. Episode 4 returns to the post-pandemic landscape, two decades after the main event, and for the most part, stays with the Traveling Symphony.

When we last saw the troupe, a stranger had approached and enchanted Alex (Philippine Velge), its young and impressionable performer. Alex is unique in her group, having been born post-pandemic. For her part, Kirsten feels responsible for the younger Alex, and when the stranger’s advances (as well as inconsistencies in his story) set off her internal alarms, she took him aside and stabbed him. 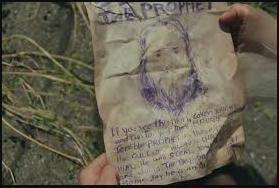 When episode 4 begins, Kirsten is still trying to learn more about the stranger. Who was he? What did he want? What did he say to Alex? Disturbingly, she and Alex, while on the road, find a handmade flyer with the stranger’s face on it. Here, he is called The Prophet, and he is accused of taking children. Alex confesses that she planned to run away with him. As Kirsten ponders this potential betrayal, she also realizes that she must learn more. As The Prophet had quoted the Station Eleven comic, Kirsten decides the best course of action is to track down the book to the place where she hid it: Pingtree.

The Traveling Symphony is a place of traditions. They don’t leave The Wheel. They perform dramas and comedies at particular times of the year. A different stranger, from the Museum of Civilization, invites them for the second time to perform at the Museum, but Sarah (The Conductor, played by Lori Petty) turns him down…because they don’t leave the Wheel (the periphery of Lake Michigan, where the troupe performs again and again in the same series of towns). Despite these rules, the group actually has broken with tradition in the past. Pingtree used to be one of their regular stops, years before when Sarah was married to Gil (David Cross, pictured). When Gil left her for a professor named Katrina (Sarah Orenstein), Sarah banned the stop at Pingtree, where Gil remained. 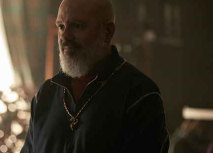 Kirsten convinces Sarah to take the troupe of Pingtree once more by lying about rumors of Katrina’s death (Katrina remains very much alive). When they reach the small Pingtree community, the troupe finds they are very much traumatized and alarmed by the recent departure of their children, all of whom were taken by The Prophet. Realizing that Katrina is alive, and in an effort to spite/impress her former flame, Sarah allows a presentation of a modernized/re-imagined Hamlet, and gives the lead role to Alex, much to Kirsten’s annoyance. As the troupe works its way through the new material, Kirsten and Alex struggle with their trust in each other. The Prophet has changed something in Alex, his words worming their way into her consciousness and making her suspicious of her longtime friends. Kirsten becomes more and more aware of this change and struggles to overcome the chasm that has opened between them. As she focuses on this, the normally cautious Kirsten is caught unawares as The Prophet springs his trap: unleashing the lost children as suicide bombers in Pingtree.

Episode four exemplifies the quality that makes Station Eleven excel: its fine balance of characterization and plot. As viewers, we are allowed to enjoy the characters. The plot pauses long enough to let us live with them for a little while. The troupe really does live up to its ideal that survival is insufficient. The soul needs sustenance, and the players provide it through their art. Art is what makes life worth living, and in the beautiful moments when we see the characters perform (Kirsten and Alex in the different Hamlets, Sarah on the piano), we understand the power of art, and why it matters, to the characters and to us. The title alludes to this by being metatextual on a couple of levels: Rosencrantz and Guildenstern are characters from Hamlet, which the Traveling Symphony recently performed in a traditional manner. These two peripheral characters went on to star in their own celebrated play, a modern twist on Shakespeare’s Hamlet, just as this episode also re-imagined that same play. Of course, the status of their deadness (they are dead in their play, but not in the Station Eleven episode title) might also be referencing Katrina’s supposed death, as well as the question of the Prophet’s current whereabouts. It is both playful and ominous.

With the children returned in such a ghastly manner, the question remains: who is the Prophet? What does he want? How does he know about Station Eleven? Is he in any way related to the Museum of Civilization? Though I imagine the series will pivot to other characters/plot points, I believe the future troupe is its strongest storyline. That being said, it is fascinating to see a tale about a pandemic in the present sense, particularly as the book was written before our current COVID crisis. How does Station Eleven hold a mirror to us, and how does it NOT? It has been suggested that COVID, or rather humanity’s reactions to it, have ruined Dystopian fiction: some are sick of the gloom altogether, and others are disillusioned to note that real-life people are not heroic or particularly intelligent in the face of adversity, despite the resilience and ingenuity our beloved characters display in fiction. I’m of the opinion that human flaws are fascinating and that fiction gives us a way to process events and glean insights into the real world. Station Eleven, the TV series, airs AFTER our real-life pandemic has started, and asks questions about the very nature of humanity. I think these questions are always worth asking, but especially now, in a world that has changed so much since the book was written. I look forward to seeing how the different characters and timelines will start a dialogue about ourselves in the present.