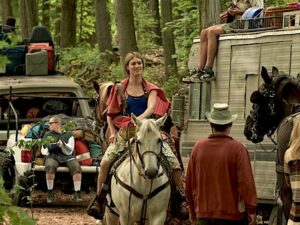 Having established two core timelines in the season opener, with the latter coming in the final few moments, Station Eleven‘s second episode is weighted far heavier in the favour of latter-day Kirsten (Mackenzie Davis), and her traveling Shakespeare troupe. Where Jeevan (Himesh Patel) and young Kirsten (Matilda Lawler) formed the basis for the entire show’s premise, they are, this time, featured only in flashbacks which do well to tease the development of the world’s eventual descent into an apparent Last Of Us-esque wasteland. This narrative tactic, for this episode, is used well. We see Kirsten for who she is in her final form – justifiably cagey and conservative to newcomers – but are also drip-fed fleeting glances of key moments of her youth from the point that she met and locked down with Jeevan and his brother. However, should this editing method be maintained as is for the remaining eight episodes, you can’t help but wonder how long the mystery keeps the attentions of returning audiences.

No doubt, given the narrative method, there are going to surely be reveals, but their impact will be based on the questions that the story poses, which, so far, are few and far between. If the first episode was about establishing the premise, then the second episode was about establishing the ‘present day’ characters. Kirsten is as close to a celebrity as there is left to exist – known far and wide for her acting chops as the Traveling Symphony takes their show camp to camp delivering America’s last form of entertainment for sunburnt survivors. Alongside her, Lori Petty is The Conductor (a Managing Director of sorts). There is a showrunner, in Dieter (Joe Pingue), and the pregnant friend in Charlie (Clark Backo), who after having her child, reveals to Kirsten that she intends to establish some roots for her new family, rather than continuing down the old dusty trail. There is also a mysterious outsider who wishes to join the clan, known only as Prophet (Daniel Zovatto). Kirsten does not take well to this, she recognizes and addresses the threat.

Between her violent response to his imposition and her selfish take on Charlie not wanting to take a newborn on the road, it is evident that Kirsten has suffered great loss in the past 20 years, as seemingly everyone has. And, therefore, is reluctant to compromise her new family, in the symphony.

Elsewhere in the past, we have a thread entirely aside that poses the potential to bust this show wide open. Following his death in the first episode, Gael Garcia Bernal’s Arthur is cast back upon as he meets with a mysterious pal in apparent graphic novel author, Miranda Carroll (Danielle Deadwyler), who has visited him on this occasion to share a copy of her latest work, called Station Eleven, thus elaborating on an Episode 1 scene. There is a meta dynamic hinted at, as elements of this story seem to draw parallels with what is actually taking place, though we are not yet shown enough to begin to connect any dots. Exactly what ‘Station Eleven’ is, and what it means, seems to be the show’s great question at this point. Intriguing as this may be, a good mystery requires interesting and meaningful characters to service it which, so far, Kirsten and Jeevan aside, they are not.

The other baffling query is if indeed all has stemmed from a horrific extreme flu pandemic (who knew?), why has nothing recovered in 20 years? Nothing seems to have been rebuilt, and America (at least) exists in a post-apocalyptic state. There must be more to it than this, and that notion is enough the ensure that Episode 3 and beyond are worth turning up for.

Station Eleven is streaming its first five episodes on HBO Max now, with the next two episodes dropping on December 30th.