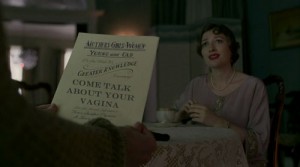 Congrats to Mrs. Thompson!  Finally, her clinic is underway.  Soon enough, it’ll open its doors to the women of Atlantic City.  Normally, I’d suggest that you chill those bottles of champagne, because we have cause to celebrate, but her clinic for prenatal care is off to a rough start.

The Catholic Church has a noxious influence on the clinic’s affairs.  One particular nun’s impractical—and prudish—attitude toward sexuality—and really just flesh in general—makes it difficult for Mrs. Thompson and Dr. Mason to teach women about their bodies.  When women eventually enroll in the hospital’s classes, can the instructor say, “Vagina”?  Nope.  “Menstruation”?  Let’s try “Time of the Month”.  “Pregnant”? Ehhhh, no, but “With Child” could work.

Mrs. Thompson’s predicament reminds us that if you can expect anything from this show, it’s that women get shafted.  You can also expect that Mrs. Thompson will do her best to change that.  This season, she’s renewed her on-again-off-again social activism. 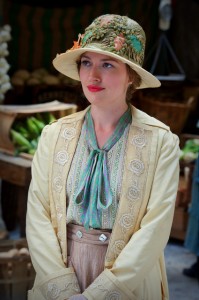 Early on, in season premiere, as she tours a hospital wing that she and her wealthy husband made possible, a patient wanders into the hall, freezes, and cries for help as blood exits her vagina, falls through her dress, and spills onto the floor.  A miscarriage, a bitter doctor tells Mrs. Thompson later, a miscarriage that could’ve been prevented, had these women known how to take care of their bodies.  Now, Mrs. Thompson is attempting to offer an answer.

But, as I’ve suggested, women don’t get it easy in this show.  We’re in Prohibition, long before Roe v. Wade—when women could finally claim ownership of their bodies—before the decades of political victories that followed suffrage.  In this show, a woman can’t get an abortion, often doesn’t have the intellectual means to take care of herself—let alone her gestating child—and can’t demand respect.  Al Capone can slap a hooker’s breast and get a giggle in return—no complaint, not from the prostitute, let alone anybody else.

In the world of Boardwalk Empire, women’s biggest victory, thus far, is the right to vote.  There was also the passage of the Volstead Act, a bill, in part, for females, by females.  That short-lived Act was a woman’s issue, and I think the writers of this show often frame it as such, too.  Especially in the first season, female characters like Mrs. Thompson—then Mrs. Schroeder—would live in fear of their husbands, who would get drunk and beat their wives.  Mrs. Thompson and the Temperance League tried its best to break that cycle of violence. 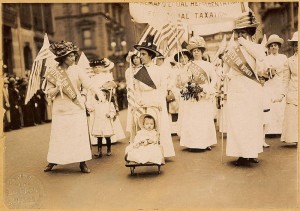 The writers have plotted the clinic as a woman’s issue, too.  When Mrs. Thompson’s toiling away at the hospital, I, at least, understand her not as a wealthy do-gooder but as a Woman.  In the premiere, when she first moved for a clinic, Mrs. Thompson had been inspired by Carrie Duncan, the aviatrix—so inspired that she drove to the coast to watch the plane take off.  As Duncan takes off and soars above the beaches of Atlantic City, a wistful smiles spreads across Mrs. Thompson’s face.  In the fourth episode, as the clinic’s future begins to look glum, Mrs. Thompson learns that her heroine’s plane has crashed.

Still, things are changing in the world of Boardwalk Empire.  There’s at least a glimmer of hope, conservative nuns and misogynists be damned.