We can now confirm that the Croatian town of Šibenik will be used as a new shooting location for scenes in the upcoming fifth season of Game of Thrones. Astute book readers can probably guess what this location will be used for, from the images alone.

Šibenik town officials and the Deputy Mayor, Danijel Mileta, announced this week that the show will be shooting in their town in September. However, the announcement was met with some unfortunate local controversy. Here’s a rundown of it from WiC’s report: 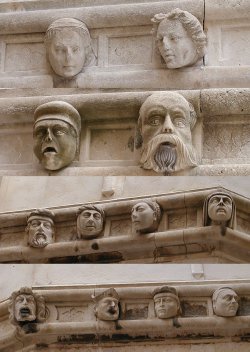 The announcement … has been met with some local controversy. According to Šibenik.in, HBO has had trouble securing one location in the center of town due to a bishop’s objections. Because of the content and themes of Game of Thrones, the bishop has decided he doesn’t want the diocese-managed building to be a part in the project.

Given the area being discussed and the diocese’s involvement, the site is almost certainly the Cathedral of St. James. The potential location is referred to as an important one for season five, and it requires actors to pass through the portal. The structure would be recognizable, pointing to exterior shots. The Cathedral’s ornate portal is distinct, as are some other aspects of its exterior, such as the heads on the facade of the building.

Meetings are allegedly continuing this week in an effort to resolve the matter.

Hopefully, everything will soon be cleared up, and all parties satisfied.

In related news, the Spanish city of Seville was recently confirmed as a shooting location for Dorne in Season 5.