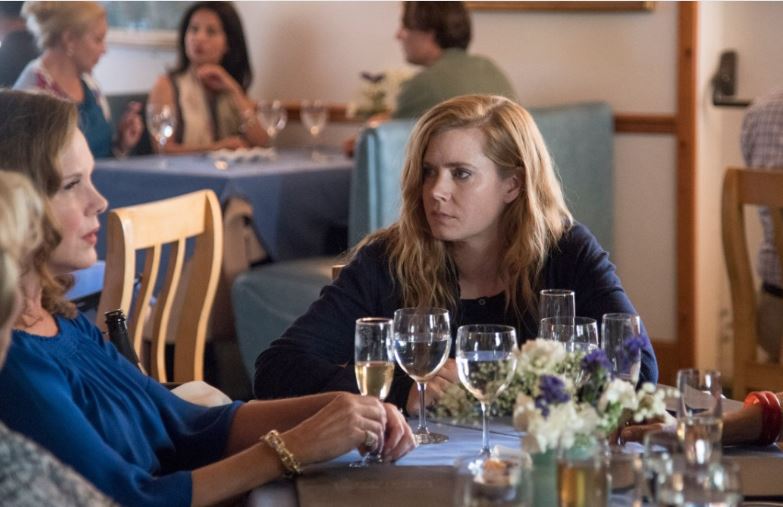 “We need to talk about your daughters. One of them is dangerous and the other is in danger.”

Episode Four of Sharp Objects begins by addressing the events of Episode Three: when Camille gets home, she finds an apologetic Amma, who wants to make amends with Camille after their recent confrontation in front of Detective Willis. Camille, too exhausted to fight and wanting to connect with her younger sibling, accepts the apology, despite noticing Amma’s continuing tendency to belittle her friends. As we delve further and further into Camille’s memories, we can see why she longs for Amma’s affection. Camille’s mother has pushed her away from her whole life, even neglecting to celebrate her birthdays in the years following Marian’s death. As a teen, Camille was discouraged from even entering Adora’s bedroom, where her mother would hide away from the world during her mourning.

Adora’s personality greatly affects the lives of those in her family and her community. She cherished Marian, and ousted Camille from her life and her attention, even when Camille lived at home. In previous episodes, we have seen her send her husband away from her bedroom, as well. Adora has a great need for sympathy, kindness, and attention, but no desire to return it. In 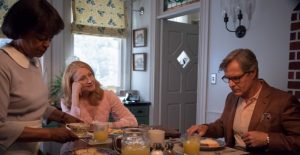 “Ripe,” Alan finally has enough and reminds Adora that Marian was his child, too. How will Adora’s manipulations affect each of her remaining daughters? On a larger level, Adora also makes her presence felt throughout town. Though she excuses herself from a lunch with the local ladies, she is convinced that they will talk about her. Later, she is proven right, when Chief Vickery visits her best friend (and frenemy) Jackie to ask questions about Adora. Though Adora keeps a close relationship with the Chief (she has her husband to prepare the Chief’s “regular” order), she makes it clear during their meeting that she has the power to see the Chief ousted. The reason for the threat is the Chief’s suggestion that the town cancels its annual Calhoun Day celebration. Zeke Calhoun is the fictional Confederate founder of Wind Gap, and Adora is clearly adamant that the town’s tradition must be upheld at all costs, dead little girls notwithstanding.

“In Wind Gap, every woman gets a nasty label if they don’t conform to the rules of engagement.”

Meanwhile, Camille goes to lunch with her mother’s friends in order to find out what the gossip mill is saying about the murders. As she expected, people distrust John Keene, brother of the second murdered girl Natalie. Camille feels a kinship towards John, who dislikes Wind Gap as much as she does. She notes that the locals are consistent in their disapproval of John’s open mourning. He’s “too sweet, if you ask me,” notes one of the ladies.

As Camille explains to Detective Willis later on, Wind Gap disapproves of people who step outside of traditional gender roles John is too demonstrative in his grieving. Two young lesbian women died decades before when they killed themselves after being subjected to bigotry. The baby one of them left behind also suffered years of abuse and bullying simply for being related to a lesbian. Camille reveals the town’s biases and fault lines to Willis as they go to the woods to visit the scene of the murder-suicide. During an exchange of information, Camille tells Willis that football players had their way with young teen girls in those same woods, and Camille remembers when it happened to her. Though the adult Camille is adamant that the encounter was

consensual, the younger Camille (played by the astounding Sophia Lillis) seems traumatized during the flashback. In the present, Willis attempts to kiss, Camille, but she pulls away before guiding his hand inside her jeans. Whatever the nature of her past sexual encounters, what she wants in the present is a lack of intimacy.

Once Camille gets home, her mother watches her interaction with Willis. When she enters the house, Adora takes the opportunity to shred her daughter’s self-esteem: blaming Camille for being a willful and difficult child. She then parts with her most withering observation, telling Camille that she smells “ripe.” This is how effective the writing and the acting for Adora is: Patricia Clarkson subtly insults people throughout the series, with the softest little digs, pushing the right buttons ever so gently to get at the heart of her targets. She makes “ripe” feel more devastating than any number of invectives others might have chosen.

Though the investigation into the murders received little screen time, it was very significant time, indeed. For one thing, I suspect that Chief Vickery is smarter than he lets on. He points out that one of Adora’s daughters is dangerous, and that the other is in danger. How much does he see and understand about the family’s dynamics, and about the town at large? I think in previous episodes he was going through the motions of pretending to investigate a transient killer, but his true instinct is that the murderer is a member of the community. Meanwhile, Willis is also pursuing this avenue of inquiry. He suspects that the teeth are significant, that they “represent power for someone who feels powerless.”

For her part, Camille discovers more about the murdered girls from John Keene. John knows that he’s the prime suspect. Even Bob Nash suspects him. Bob says that his little girl Ann was corrupted by her friendship with the wild and uncontrollable Natalie. John contends that Ann was a difficult child before the girls ever met, though he does confess that his family moved to Wind Gap because Natalie had a violent incident with another little girl on Philadelphia when Natalie became upset and stuck a pencil in the girl’s eye. John further reveals that Ann and Natalie used to be friends with Amma, which Camille had never known before. The three girls used to play in the mysterious shed in the woods. Camille is clearly upset and disturbed by this latest revelation. Why does this case seem to be getting closer and closer to home?