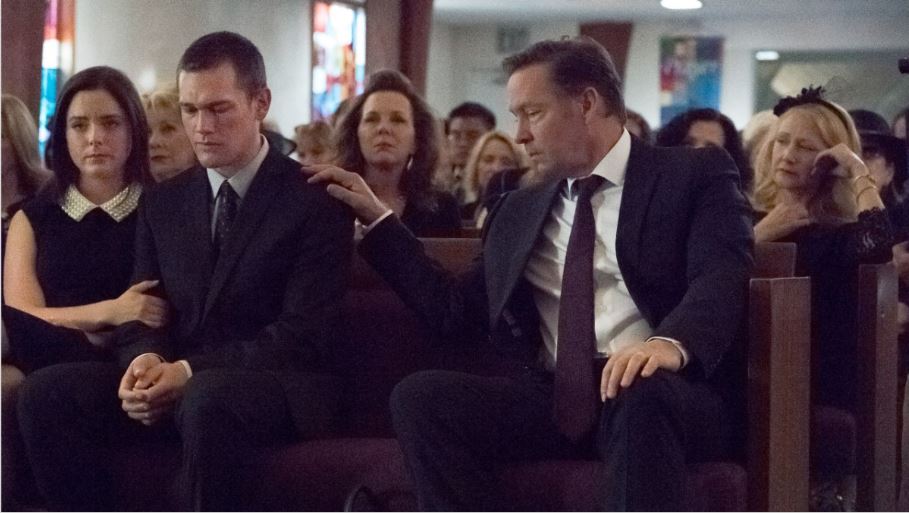 What is it about funerals that tend to bring out either the best or worst in people? Especially if it’s a child’s funeral? It’s already gut-wrenching enough to go to a funeral – scenes of grief, anger and loss are all around you but the one in the second episode of Sharp Objects really rubs everyone’s nerves raw. Of course, tensions continue to mount between Camille and her mother. Adora – a society matron who cares for appearances and what town gossip dictates – is detached and icy towards Camille – especially during the funeral for one of the murder victims, a teen named Natalie. Camille, watching, listening and reading into body language, attempts to take notes, much to the disdain of her mother. During the funeral, Natalie’s mother attempts to speak to the congregation – and its heartbreaking – and she finally bursts into tears and cannot say another word. Camille observes Natalie’s brother in the front pew, crying. Camille had heard some town 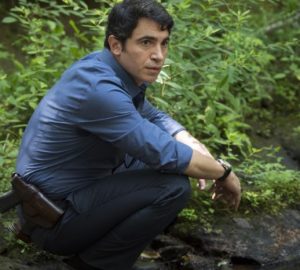 gossip about the brother, which leads her to believe that he may or may not be a suspect.

Of course, the town’s police chief, Vickery, really makes it clear he doesn’t like Camille poking around asking, asking questions and making insinuations, nor does he want Detective Willis snooping around what he calls “his town.” Got anything to hide there, Vickery? Or is it more of a control thing on his part – or does he not want to pursue the murder investigation? Detective Willis, however, asks around, visits the morgue, does some of his own research to come up with possible leads. And what is it with Wind Gap that gives me the absolute creeps? I’m getting a True Detective Season One vibe here – small rural towns, where everyone knows everyone, people are prone to gossip and once a terrible series of murders takes place, it’s only then that the townsfolk start to take things seriously. Wind Gap has its fair share of secrets to hide, I’m sure. And the fact that Camille is back in her hometown, investigating these murders seems to really be stirring the proverbial pot. Mind you, it’s not like Camille went there, with arms wide open, ready to happily embrace former friends and family members.

When Camille visits the family of the murdered girl after the funeral, you get a sense of why she couldn’t wait to get the hell out of Wind Gap. Gossipy women, her mother constantly picking on her choice of career, what she is up to and of course, how could we forget the men in the town, who make some crude remarks while Camille speaks with Detective Willis while at the local bar.

And of course, just look at Camille’s family dynamics: her stepfather seems decent; her younger half-sister Amma is well versed in the art of deception and then there’s the crown jewel: Adora. A woman of icy emotion; it’s as if Camille’s presence back in Wind Gap threatens her, but how? Why? What has Camille done to deserve this kind of resentment? Watching Camille’s flashbacks to when she was younger, you really get the sense that her mother favored Marion, the sister who passed away.

While trying to find out additional information about the young murder victim, Camille ventures to the town park, speaking to a pair of young boys, trying to piece together the scant information she has. One of the boys says something a bit troubling – that a ‘woman in white’ took Natalie into the woods. What is the hellish kind of southern horror story has Camille stumbled onto now? Eviently she talks with the youngster James and in speaking with him you see just how impoverished the boy is, with his mom sick, with an IV-drip attached to her. Police chief Vickery dismisses Camille’s plea that James could be a potential witness – because his mother isn’t the finest upstanding citizen and the boy himself at home, watching television and a gun in clear sight. So, I guess if you come from a lower economic status, no matter what you say or do, you’re doomed. You’re lumped in and judged from the start. In Wind Gap, money and status matters. If you’re born on the wrong side of town or into the wrong family, then life is going to really be harsh. 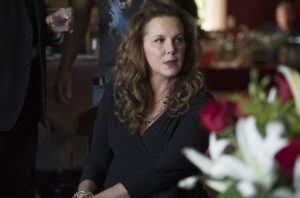 The only person so far that Camille seems to have a decent relationship with is her aunt, Jackie. They seem to have a good rapport. I can’t help but wonder what’s up with that one guy who kept staring at Camille at the wake and at the bar – I think his name is Kurt and he looked like he had something on his mind but instead of saying anything; a few dirty looks towards Camille seemed to do the trick. One thing I found very unsettling was the breakfast scene with the family. Adora was adamant that Camille sits and not cut her own breakfast fruit.

And once she was finished, did anyone see the look on Amma’s face – the way she was watching the maid – while the sharp knives were being collected? Something tells me there is a history of cutting or self-harm, hence why the knives were collected and put away almost immediately. Wind Gap is full of misery – it’s not just the grisly murders that have taken place – it’s the families; the dynamics between family members; the paranoia and anger between some residents. No wonder why Camille couldn’t wait to move away. It’s like old wounds never healed and nothing really good ever happens in that sleepy town. Mind you – Camille’s chain-smoking and drinking are coping mechanisms – but for what? What happened to her when she was younger? How did her sister’s death impact the rest of the family? Why is Adora so cold? And why is Police Chief Vickery adamant about not wanting Camille snooping around? Why won’t he cooperate with Willis? And who’s killing these teenage girls?

There are still plenty of questions to be answered. In this episode, they started ‘digging in the dirt’ as it were. Here is a look at what is ahead next week.