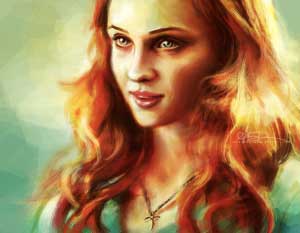 What teenage girl doesn’t dream of knights fighting in tournaments, ladies dancing at court, poetry being recited and one day, being married to the boy of your dreams, especially if he’s a prince?

Sansa Stark is the eldest daughter of Lord Eddard and Lady Catelyn Stark. By rights, because Ned is the Warden of the North in Winterfell, Sansa is more or less regarded as a princess. When Ned accepted the position of Hand of the King, this elevated his family’s status, thus making Sansa eligible to marry Prince Joffrey.

Sansa has a tender heart and believes that everyone around her is kind and just. She truly is an innocent girl, naïve to the evil ways of the world. She has lived a sheltered life at Winterfell, being taught the finer arts of needlepoint, dancing, poetry and household management. She often receives high praise from her Septa, as she always wants to please her parents and wants to be a genteel lady of the court. After all, a dutiful daughter knows her place in this world: to uphold tradition and please her parents by representing herself as a noble and gently bred lady, to marry a proper Lord or another man of high rank and to produce heirs for her husband. 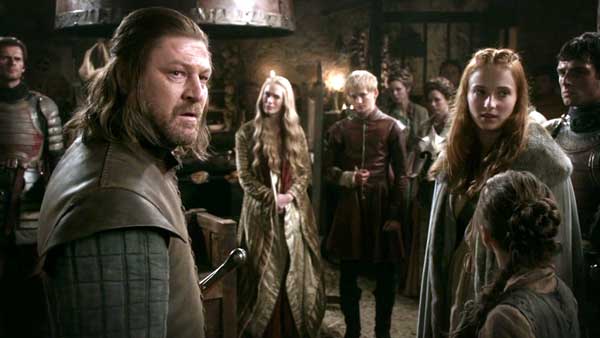 Sansa, Sansa, Sansa. Time to wake up and face reality. King’s Landing is not the ‘perfect kingdom’ that you had hoped it would be. The people are not kind and courteous. Everything you were taught was a lie. The theory and the reality of what Sansa comes to understand is hard for her to accept. We see how dreamy eyed and happy she is when the King’s retinue come to visit Winterfell in the first season. Although she was only 13 years old, she was smart enough to understand that if she became engaged to Prince Joffrey Baratheon, it would make her a princess AND make her father the second most powerful man in the kingdom. This, for me, was a turning point in the series. It led me to believe that Sansa Stark was very mature in matters of betrothal and status. Unfortunately, her innocence begins to fade away with the incident regarding the butcher’s son, her younger sister Arya, Prince Joffrey and the dire wolves. Prince Joffrey’s petulant nature soon revealed itself. Arya was quick on her feet and keen with her intellect to see what a fake and phony Joffrey really was. Imagine that – a little girl of 10, besting a teenage boy of what, 14 or 15 years? AND that he is a prince of the realm? 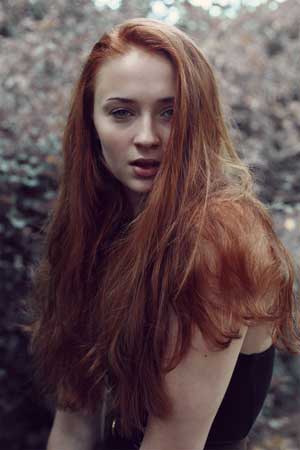 Sansa was caught in the middle. Upset at her sister, confused with the way Prince Joffrey behaved, the outcome was that Lady, her own dire wolf, was commanded to be put down. This was very upsetting for anyone who read the book and/or watched the series. I’m sure I wasn’t the only one who was getting upset, thinking, “Sansa, is this who you REALLY want to marry and spend the rest of your life with?!” I always thought that blood was thicker than water. Sansa should’ve known better and defended Arya. To think, the poor butcher’s son was killed by Joffrey’s command. A nice preview of what marriage is going to be like with Prince Joffrey.

Sansa basically goes from the frying pan and into the fire. She becomes betrothed to Prince Joffrey during her visit to King’s Landing, only to see King Robert Baratheon die from hunting wounds, her father executed for his ‘alleged’ treason against Joffrey and her poor Septa beheaded. What a bitter blow, after all the crying and begging she did in court, humiliating herself in front of all those liars and schemers, and for what? In the end, Prince Joffrey did exactly as he pleased. Sansa went from being a sweet tempered teenage girl with dreams of courtly love to being a scared, confused teenage girl, desperately trying to keep up with her act of duty and love as the Prince’s future wife, while looking for a way out of King’s Landing. 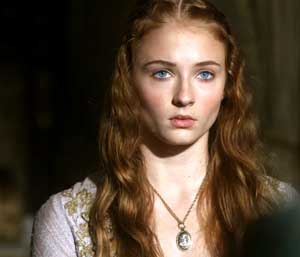 Seeing as how her every move was watched and reported back to the Queen Regent, with no way of escape, what else could Sansa Stark do? In season two, we see that Sansa has become a little wiser in the ways of the court. She is beginning to play a part and becoming a consummate actress. She went from an innocent girl in season one to a survivor in season two. Being nice has gotten her nowhere fast. She must learn to put on a mask and lie through her teeth. Must be difficult, when your every move is dictated to by the Queen Regent or your oh so considerate fiancé. No lessons from her Septa could’ve prepared her for the horrors and the abuse that she had to endure – and no less in front of courtiers – during season two. Physical abuse, emotional abuse, isolation from her brothers, sister and mother, and a terrifying almost near rape ordeal have made Sansa see the reality of the situation and have made her come to realize she was living in a fantasy world before. There are no heroes in King’s Landing. Only enemies. It must be very difficult for a 14 year old to distinguish friend from foe.

The rare kindness is shown to her from people she doesn’t know or quite trust: Littlefinger, the Hound and Tyrion Lannister. The Hound, on a few occasions, has warned her – nay, he has spelled out the bloody, unvarnished TRUTH about the Lannisters and King’s Landing to Sansa. Not quite what she wanted to hear. The Hound is a scary guy but obviously he tells Sansa these things because he is trying to warn her to watch her back and trust no one, especially Prince Joffrey.

Tyrion Lannister came to Sansa’s aid on more then one occasion and even offered to get the betrothal dissolved. He also put his maniac nephew in his place and told Joffrey he ought to treat Sansa Stark with more dignity and respect. For all of Tyrion’s warnings, they fell on deaf ears, because Prince Joffrey could care less about treating Sansa with kindness. Petyr Baelish – also known as Littlefinger – keeps an eye out for Sansa but really….we all know the kind of character this man has. He claims he wants to help Sansa escape from King’s Landing. All because she has a ‘tender heart’ and reminds Petyr of Catelyn at that age. Littlefinger never does anything out of the kindness of his own heart – only for profit. In an ironic twist of events, her engagement becomes null and void upon the suggestion of Grand Maester Pycelle and the high Septon’s council. Could it be, a ray of light through the darkness? Prince Joffrey has now declared himself to Margaery Tyrell of House Tyrell. This means….Sansa is free of him. Or is she?

As Tyrion said, “Lady Stark, you may survive us yet.” Sansa: please survive. Please thrive. You’re a Stark of Winterfell. And winter is coming.

If you enjoyed this profile take a look at our other Game of Thrones cast features.