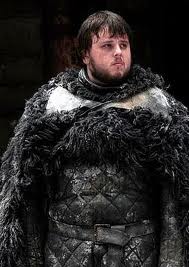 “I’m a coward.” Alas, these are some of the first words we hear coming from Samwell Tarly’s mouth when we meet him at Castle Black, during the first season. Poor Samwell. Born into the Tarly family, where his father is Lord Tarly, Samwell preferred reading and listening to his mother sing to him, then sword play, training and fighting. Not all men are meant to carry a sword and ride into battle.

Samwell is shy, timid and appears to be afraid…of his own shadow. Beneath that cowardly exterior is a smart young man. He loves to read. In Westeros, not too many people are able to read. You have the Maesters of the Citadel, Lords of various keeps and nobility who were all tutored and educated at one point or another in their lives. Reading affords knowledge. Knowledge is power. Samwell’s ability to read could lead to interesting opportunities at the Wall.

Not everyone in the seven kingdoms is a bad person, with evil intentions. Samwell has a gentle heart and sweet nature. When he comes to Castle Black as a new recruit, he has no skill with a sword, no friends and no military intellect. Sadly, he really had no choice but to go to Castle Black and become a Brother of the Night’s Watch. Well, what would you do if your father was a great Lord, with vast tracts of property and a castle, and threatened you with death? That you would go hunting one day with your father and some of his men, and that there’d be a ‘hunting accident?’ 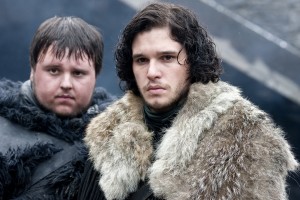 Only Samwell knows what he father really meant – get rid of his son, as he is no proper heir to the Tarly name.  The Wall looks like a better option. After all, you get to live, which is pretty important. Secondly, you may learn a thing or two about being a ranger or a steward.  Third, you might make some friends.

Unfortunately, Samwell’s inability to defend himself catches the eye of the training commander, Ser Allister, who uses Samwell and makes an example out of him by asking other recruits to attack him until he yields. Even when Samwell yields, the training commander doesn’t prevent further embarrassment or injury. This is where we see Jon Snow first stand up to Allister Thorne. Another recruit, Rast, who possesses a mean streak himself, takes pleasure in beating Samwell into submission. BIG mistake for him. Later in the evening, Jon, Pipp and Grenn don’t ask Rast – they TELL him – one more move to hurt Samwell and he is in BIG trouble. The most convincing part of this request is how sharp Ghost’s teeth are and how red his eyes glow when angry. 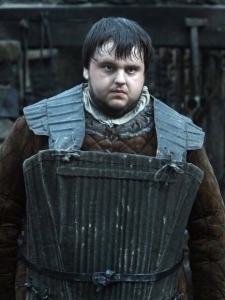 After that kind gesture, Samwell gets to know Jon and tells him why he came to Castle Black. They have one thing in common so far: they are both outcasts in their family. Castle Black is a tough place, where only the strong survive and the weak get left behind. Samwell and Jon forge the beginning bonds of a friendship, which I personally believe, will grow stronger with time.  Samwell also begins to show a shrewd intelligence – when Jon is picked to be a steward instead of a ranger – he points out to Jon that this is not an insult, but a great honour. Samwell feels that Jon is being groomed to be the next Lord Commander of the Night’s Watch and therefore must accept the position that has been bestowed upon him, instead of getting angry about it. Besides being a trusted friend and ally, Samwell is intuitive. Of course, he loves to read and has access to the ancient books and papers in Maester Aemon’s library and he likes to tell little tidbits of trivia here and there, while out on patrol or duty with his fellow brothers.

And yes, because he’s off spouting things about what may lay beyond the Wall, magic and the White Walkers, he’s often teased for it. Where Jon is always brooding about his place in the world and who is mother is, Samwell provides the comic relief.  Sam is the perfect foil to Jon.

Second Season shows the Brothers of the Night’s Watch located deeper in wildling territory. This is where Samwell and Jon meet Craster and his daughters/wives. Samwell meets Gilly, a young girl close in age, who is pregnant and longs for freedom. While the idea of taking Gilly seems fine and dandy to Samwell, Jon understand the rules AND the consequences of such an action.  As they all head further north, they make a stop at the Fist of the First Men. Samwell, doing his research, tells Jon, Pipp, Grenn and Edd where they are and who settled there. Jon believes that the men who came to the Fist didn’t settle there. They were running. They were scared. The question is: what were they running from? What could’ve possibly scared people that they’d want to come to the frigid north to get away? 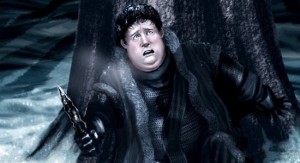 Burying your nose in the books isn’t always a bad thing, you know. And it’s a good thing for Edd and Grenn, because with Jon off with Q’oran Halfhand to scout and hunt down wildlings, they rely on information Samwell provides for them. Even though Samwell repeatedly says things like, “I’m not cut out for work like this,” he’s good at being able to remember important details, especially when it comes to the survival of the Night’s Watch. After all, while out with Edd and Grenn, they stumble upon an artifact that looks like a shield. Was it a shield….or was it something that was deliberately planted, so the three of them could find it? After taking a look at the contents of the package that was buried in the snow – against Edd’s wishes – Samwell discovers arrow tips, a black ranger’s cloak and a strange looking substance, known as obsidian. It also goes by another name, ‘Dragon glass.’

Samwell, sweet Samwell. What have you stumbled upon? What is the significance of Dragon glass and why will you be the one to wield it? I like to think that Samwell Tarly is exactly like the Lion from the “Wizard of Oz.”  Sure, he starts off being scared and acting like a coward. But I believe that when it comes down to it, when the moment is right, Samwell is going to show everyone that he has a backbone. That he has the heart and the stomach of a Brother from the Night’s Watch. That underneath that bookish exterior lays the heart of a fierce warrior.

Here’s hoping we get to see that bravado…..especially since the final moment of the season finale was the look of horror on Sam’s face, because everyone knows what three blasts means: WHITE WALKERS!