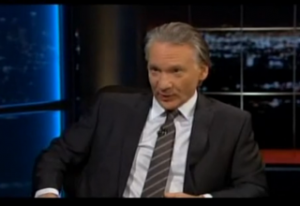 “It’s no coincidence that the type of tree which God forbade Adam and Eve eating from was the tree of knowledge. Rick Santorum home-schools his children because he does not want them eating that (audio bleep) apple,” Maher said. “He wants them locked up in the Christian Madrassa that is the family living room, not out in public where they could be infected by the virus of reason.”

Maher often speaks out against religion and even released a film called Religulous, taking on Christianity and faith in general throughout an entire documentary.  Presidential Candidate, Rick Santorum didn’t find Maher very funny, though lashing back at the political pundit saying:

“All of a sudden, if you’re instilling faith and teaching them about God in your home, you’re a madrassa, according to these folks, as if reason doesn’t take place in these homes,” Santorum said. “Our children will out-reason him. My 12-year-old will out-reason Bill Maher when it comes to understanding how logic works, ’cause (Maher) is completely illogical.”

Bill has taken some heat recently on several fronts but we still can’t wait to see what he has to say about all this on Friday night at 10PM on HBO.