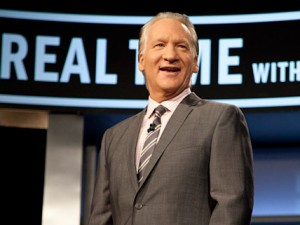 LOS ANGELES, April 24, 2012 – HBO has renewed REAL TIME WITH BILL MAHER for its 11th and 12th seasons, it was announced today by Michael Lombardo, president, HBO programming. Currently in its tenth season, the talk show has been picked up through 2014 as part of Maher’s new three-year deal with the network.

“Bill Maher’s irreverent wit and fearless insights make him the perfect observer for these unpredictable times,” noted Lombardo. “I’m delighted that we can continue to offer an uncensored forum for his original and thoughtful humor.”

Allowing Maher to offer his unique perspective on contemporary issues, REAL TIME WITH BILL MAHER debuts new editions on Friday nights (10:00-11:00 p.m. live ET/tape-delayed PT). The show includes an opening monologue, roundtable discussions with panelists, and interviews with in-studio and satellite guests, and was hailed as “hands down the funniest show on TV” in Rolling Stone by “Family Guy” creator Seth McFarlane, who added, “It surprises me more than any other show I watch.” At 4.1 million viewers per episode this season, REAL TIME WITH BILL MAHER’s gross audience is the highest for the series in three years.

Bill Maher has been favorite of subscribers since his first special on the network in 1989, starring in nine solo specials, including the hour-long presentations “Bill Maher…But I’m Not Wrong,” “The Decider” and “I’m Swiss” (both nominated for an Emmy® in the Outstanding Variety, Music or Comedy Special category), “Victory Begins at Home,” “Be More Cynical,” “The Golden Goose Special” and “Stuff That Struck Me Funny,” and two half-hour stand-up specials, plus the specials “30 Seconds Over Washington” and “Comic Relief VI™.”

He was the creator and host of “Politically Incorrect,” which was produced by HBO Downtown Productions and debuted on Comedy Central in 1993. The series moved to ABC in 1997 and ran through 2002.

His latest book, “The New New Rules: A Funny Look at How Everybody but Me Has Their Head Up Their Ass,” was published in November and made the New York Times bestseller list. Maher’s 2006 book, “New Rules: Polite Musings from a Timid Observer,” also made the New York Times list, as well as bestseller lists across the country. He is also author of the books “When You Ride Alone You Ride with Bin Laden: What the Government Should Be Telling Us to Help Fight the War on Terrorism,” “Does Anybody Have a Problem with That? The Best of Politically Incorrect” and the novel “True Story.” Maher produced and starred in the 2008 feature film “Religulous,” the seventh most successful documentary of all time.