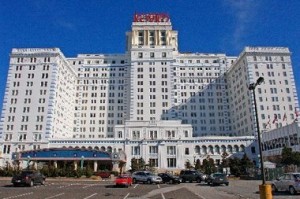 In an effort to capitalize on the massive success of HBO’s “Boardwalk Empire,” Resorts Atlantic City will adopt a sweeping Roaring Twenties theme throughout the property.

Dennis Gomes, who is purchasing the resort (with developer Morris Bailey), told the Associated Press that dealers, cocktail servers, bellhops and others will dress in period costumes with music from the Jazz Age in the background. Even drinks (no doubt heavy on the whiskey) will embrace the Prohibition era vibe.

It’s a genius move and one the seems pitch-perfect for the historical Resorts.
The Boardwalk opened on June 26, 1870 and ever since, it’s been a source of amusement for millions. Gothic hotels majestically loomed in the sky and it quickly became the premiere destination for the upper crust, mainly from Philadelphia.

Resorts was originally known as Chalfonte-Haddon Hall Hotel and at one time was considered to be the city’s largest hotel by capacity.

From the ’20s to the ’40s, regal businessmen and their families would bask on our beach by day. By night, throngs would swoon at virtually every big band in the country at the world famous Steel Pier where Benny Goodman, Guy Lombardo, Dean Martin, Abbot and Costello and of course ‘Ol Blue Eyes made their bones.

In the early ’70s, Resorts International was on a steadfast mission to operate casinos worldwide. Sensing that A.C. would soon initiate gaming, they bought 55 acres of boardwalk land from New Jersey’s Housing and Re-Development Authority along with the imposing Chalfonte-Haddon Hall Hotel.

Read the entire article at:  (NewJersey.com)