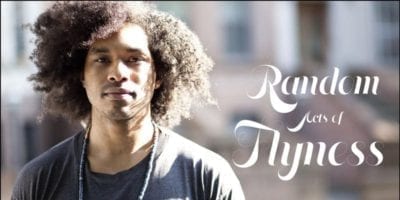 Random Acts Of Flyness wrapped up its first season the other week and if you weren’t up for it don’t fret because this post weighs through it for you. Maybe, based on what you read here you’ll seek it out. First, Random Acts Of Flyness is a late-night series from artist Terence Nance. Like Issa Rae of Insecure HBO has afforded this creator an opportunity to be an Executive Producer, Writer and Actor in his own original program. This is something I celebrate when it comes to HBO. They allow creators to actively engage in the story telling and vision. So if you’re wondering, like me, what exactly what this series is about- hopefully you’ll walk away with a little more insight after reading this series overview.

I do not claim to have all the answers to this series. Instead, I offer up an opportunity for anyone who dares to sit down, and open their mind, an opportunity to address America today and the role their actions and thoughts play in how we see it. I can best sum this series up by saying it feels like a lesson on the black experience and black history through a black lens. There are so many layers in each episode that I doubt anyone can ever fully capture each message and its intent. What I’ll do now is go over some of the themes that were discussed this season. While covering those topics, I’ll attempt to unpack the content and message that came forth.

The death reaper appears early in the season. It’s important to note that the reaper is a black woman. She knows to give the white child life, and that despite all odds, the black children get death. They’re pushed into a room of other black hands in the darkness. She shuts the door, opens it and runs in after them, only to return back to life, through the door called life, tired, sad, hurt, and instructed to get in place and do it again. This image tells the story of the black woman and her constant responsibility for everyone around her. The experience she must endure day in and out, and still go on knowing the challenges those she cares about most have to face. And when she’s absent or near, her overture bobs and weaves through the season. A constant reminder that whether the police or fried foods are near, the death reaper can either steal us or spare us along the way.

Another theme that appears is that of bisexuality, openness and trans-sexuality. While there are not many consistent story-lines from each episode, the relationship of Nance and his partner remain present. What works so well in these settings are that their actions really push hetero-normative ideologies aside. Each character moves with a comfort and ease. They’re okay with one another. They’re okay having feelings and the chaos that comes with being open. They’re okay with being in a relationship of two with men and women open along the way. While this

ease and acceptance is not the case in the Black community, how fly would it be for people to love and celebrate one another in a way that allows everyone to be genuinely present, happy, and fulfilled? We also see the Trans experience through intimate reflective conversation points. These men and women sit exposed, open and tell their story and sing their truth aloud. I appreciate this content because Black Trans men and women experience mortality rates higher than any other alphabet in the group. These conversations allow Trans people a space to invite us into their experience and teach us how to be better allies for them.

While we learn that God is a woman, Michelle Obama affectionately; we also see black men portrayed in an unfamiliar way. One of the best commentaries on masculinity and identity came when men strolled through the streets shouting compliments to other black men. Those same compliments in real life equate to homosexuality or questioning of one’s identity, but in this world, it’s all love. I smiled a big smile. I found myself submitting and escaping into a world where kindness and sincerity trumped this image we were taught to display for acceptance. The content is escalated as a little boy (presumably queer) chases his shadow. He eventually lands in his home wrestling with a male relative. His uncle comes in and denounces the behavior and demands they stop it. It’s gay behavior after all. He tells the boy he needs to grow into his shadow. WOW! This idea of the shadow you cast versus the shadow you follow and how it’s rooted in the home and what you’re told you can or can’t be crosses gender and color lines. I needed a moment to let that experience sink in. There’s also a powerful moment when a man stands at a podium and apologizes. And in the midst of his apology, he strays and begins to explain, but is brought back on script. How powerful is an apology that mimics accountability and acceptance? Well he offered one up in a way that felt long overdue. It is indeed possible for a person to inflict pain and experience pain too. And there’s no greater apology than acknowledgement for the consequences of your actions and how it impacts people directly and indirectly.

Whether it’s a lesson in “bad hair,” date-ability or their pussy, the presence of the Black Woman and her impact was never shortchanged. There was a monologue where an actor asks: “can I break you out of [the] prison- of your mind?” From there we take a poetic plight on all things hair and the journey women go through to make other people feel relaxed in their presence. There are

phrases like: “it’s time to be Bad and Proud” that lend itself to a freedom movement. The relationship that Black Women have with their hair is discussed in a way that adds value to any decision they make. And if you haven’t heard, Nance and team remind you; Asian Men and Black Women are the least dateable on apps, but don’t feel sorry for Black Women. It’s the most ironic experience to me. The irony is most clear when vegetables, darker vegetables more specifically, aren’t chosen in the super market. They’re confused but come to the realization that the whiter vegetable was watered and ultimately chosen. The two vegetables then take on the task to make themselves more appealing.  The vegetables then begin to work out (which, aren’t vegetables the primary source of nutrients and all things good? GENIUS) just to be seen. One of the vegetables even says ‘fuck you’ to those doctors. To what doctors might you ask? It felt like a message that says Black Women are naturally enough and are taken for granted but overlooked until a white person finds a doctors to take their features and now they’re visible, a trend and desirable; but only on White Women.

One of clearer themes in every episode is the Black experience. There are “things” Black people shouldn’t have to worry about but do. You see the awkwardness that ensues when an announcer on the subway says we’re stopping at Michelle Obama International Airport and the two white people smile at the black people as if to say, “we’re woke!” There’s the actor in the first episode, John, who is acting, but still feels the need to explain to the whole black room that, I’m not like this in real life, you know that I’m just acting right? A common experience that is tagged along with the “I have black friends too” announcement. An attempt to distance themselves from those before them which belittles the basic intellect of any person of color around them. We also see Blackness as a means in Hollywood and how Black characters are seen as trends and lead to Oscars versus factual storytelling.

Look, there was so much magic to unpack that I would probably have to re-watch every episode daily and take notes along the way. Each vignette felt like history lessons told through cinematic filters that sometimes juxtaposed the content on film. Sometimes the scenes looked dated, but asked questions that were more realistic and present than ever. And that’s what elevated the content. The graphics were impeccable. Nance and team weaved from social media/news clippings to on-set portrayals. If you are interested in a social commentary piece on the American experience, I say this is for you. Fortunately, the series has been renewed for a second season. This also means that you have a full year to review, dissect and prepare for the next round of content at the hands of Nance.

Check out the trailer for Season 1 below.