There are a lot of royal storylines in Game of Thrones but perhaps none so real as what happened in Belfast this week.  Elizabeth II, Queen of the United Kingdom of Great Britain and Northern Ireland, the British Dominions beyond the Seas and Defender of the Faith took a tour of the Belfast sets where much of Game of Thrones is filmed.

You may be thinking to yourself: “I hope we get a picture of her taking the Iron Throne”.  Well, she didn’t actually take the seat, complaining several times to Maisie  Williams aka Arya Stark that the chair looked uncomfortable:

“She kept commenting on how uncomfortable the throne looked, that was funny,” she said.

We did, though, get these shots from reporters who were on the scene to document the event.  Take a look: 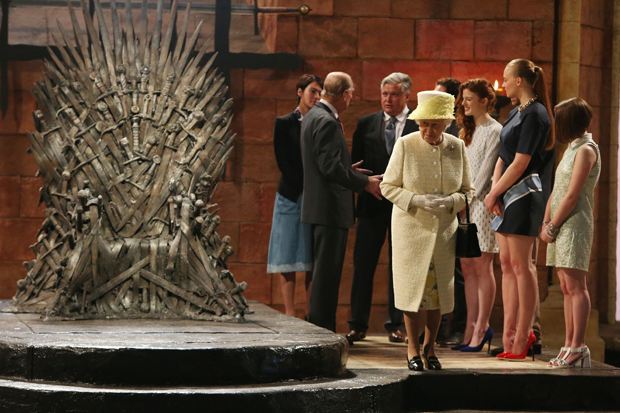 What do you think was going through her head here… 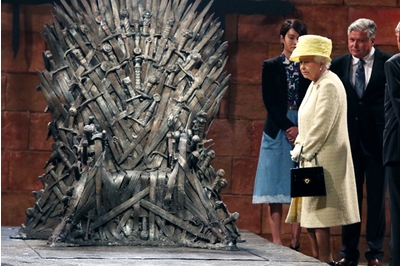 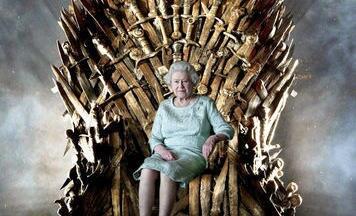 Okay so this isn’t incredible HBO news like a Game of Thrones season 5 casting of premiere date but it does say something about how popular the show has become!  John Oliver even joked that the show had become (paraphrasing) “more important to her subjects daily lives than the queen herself”.

The Queen met with stars of the show such as Kit Harington, Lena Headey, Maisie Williams and Rose Leslie.   Local born Conleth Hill, who plays the brooding Lord Varys was also there informing the Royals of the impact Game of Thrones has on the local economy and its cultural impact it has grown over the years.

This set has been seen as the first of many sets and studio branches which have been set up in Northern Ireland. This set among many others bring with it thousands of jobs and a stable shipment of money for the local economy.

The adaption of George R R Martin’s mythical story has become the most expensive TV production in Europe with an estimated £82 million going to the local economies of their sets. This information comes from the cost of the sets covering the four seasons, meaning every season the set has cost HBO on average £20.5 million!

The female Monarch known for her exquisite choice of hats, today informed the World that only one Throne is enough, and that maybe the Iron Throne is maybe too much too handle

It has recently come to light that Game of Thrones has overcome co-HBO show The Sopranos to be the most watched show in the World; could the Queen be influencing that? Is she infact a passionate fan? What would be her family? For me she would be a favorite to be Jon Snow’s mum.

Is Elizabeth II your queen? How do you feel about her eyeing the Iron Throne of Westeros?