With Perry Mason, I think HBO returns in full form akin to its early 2010 days of glory. Perhaps you’ll agree. 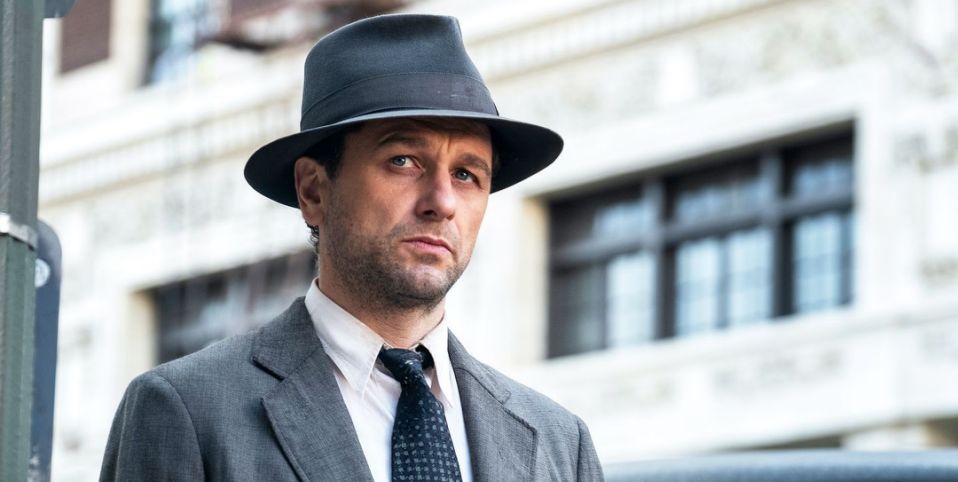 Boardwalk Empire is back.

The first episode of Perry Mason sends the audience back to the good old days of HBO, reminiscent of the days when Michael Lombardo was gloriously steering the wheels of the company.A periodic drama with high production values is something HBO always knew how to do, and with this show, it seems like they are onto an interesting concept that could carry an entire show not only in terms of storytelling but also in terms of atmosphere and experience.

Director Timothy Van Patten used to be the key director of the network back in its golden era. He directed most of the episodes in the Sopranos, and was the head director of HBO’s classic masterpiece Boardwalk Empire, earning him an Emmy Award for directing the legendary season 2 finale. Back in 2010 when the initial Game of Thrones pilot was described as a “total mess” by the show-runners and everyone involved, it was Van Patten who got invited to re-shoot the pilot and successfully starting the legacy of HBO’s most successful series. When I heard that a show taking place in the ’30s has Tim Van Patten as it’s a director I couldn’t be more thrilled- since ever since the Boardwalk Empire finale in 2014 he hasn’t made a single episode for HBO. He hasn’t really made a single episode, period, if you think about it, apart from one Black Mirror episode. I missed him so much! Now that he is back for almost a complete series on his own, we hope it means his partnership with HBO got rekindled and we will see him do more work for the network in the future. For he is probably one of the best and most consistent directors to ever work on television, at least in my opinion. 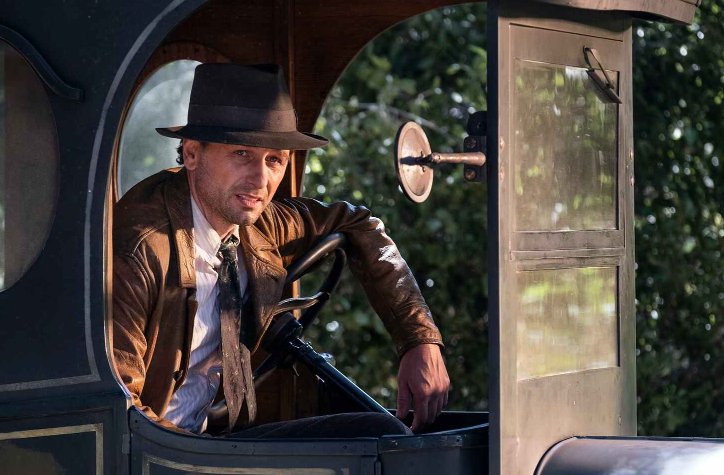 Right at the very beginning of the episode – the first couple of seconds – you see a bunch of people with 30’s hats and you hear the 30’s jazz music you know so well from Boardwalk Empire (which actually took place in the 1920s, but the two decades hold some similarities), only to be crossed with Perry Mason’s original soundtrack, scored by Terence Blanchard, and you understand that Tim Van Patten is back on his Boardwalk style, but it’s gonna be a bit different this time. The whole ambiance is dark and moody, combining 30’s period drama and film noir. 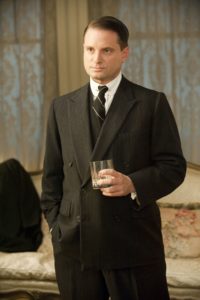 Besides the setting and the obvious corollaries, the resemblance to that former show is simply undeniable. Exactly the thing fans of the shows have been eager to get from HBO in the last 6 years. The character of Chubby, for example, from the first sequence of the episode, seems like something straight from the mind of Terence Winter and Howard Korder that could easily find its way to an episode of Boardwalk. Seeing him watching his own movie and almost dying of laughter surely reminded us of the good old days of characters from the schools of Dr. Valentine Narcisse, Nelson Van Alden or even Big Jim Collosimo. In fact, the concept of a Boardwalk-y character that appears only in the first episode is somewhat of a signature concept of Terence Winter- Colossimo on Boardwalk, Mark Hanna in the Wolf of Wall Street, Old Man Bacalaa in the Sopranos, and of course Buck Rogers in the criminally underrated Vinyl. The character of Eli, surely helps to get the audience in the mood of the early 1900’s century once more. The music, the sets, the costumes, it’s all very nostalgic for Boardwalk fans who missed this and Van Patten’s work so bad.

The cast is fantastic. You have Matthew Rhys in the lead role, always looking like he got kicked in the stomach and in agony. Shea Whigham is here, the man who played Eli Thompson on Boardwalk and since then has been in a lot of places, including last year’s hit Joker, the ever-brilliant John Lithgow is here, Juliet Rylance from The Knick, Andrew Howard from Watchmen and Banshee, and many more.

The story starts slowly by showing us the time and era first, right after presenting us with a vicious crime that will later require Perry Mason’sattention. Perry is a man with issues that he quiets down with booze and his work. Then slowly we get to know the people at play, and what it is like to investigate crimes in a different time.  Seems like there’s a lot to explore in Mason’s personal life and past, like the days in World War I and the story with his wife and son. I am surely curious to see where the mystery takes us later this season in this beautifully styled piece of television.

As promised by the actors beforehand, the familiar old story of Perry Mason has a dark turn, for sure. Who is capable of such a hideous crime? That brief shot of the baby still haunts me, quite frankly. We also got a glimpse of two police officers, one of them corrupt as Kurupt (the Amcee), that will surely play a major role in the coming episodes. Seems like there’s a huge conspiracy at play too, one that might involve forces that Mr. Mason does not necessarily want to get involved with. In fact, Perry was hesitant from the first minute about joining the case, since it seems like he got a little bit worn out by the profession. The elusive, yet fragile, E.B (portrayed brilliantly by national treasure John Lithgow) seems determined to pull him back to the case. As Silvio Dante wisely said- “Just when I thought I was out, they pull me back in”. 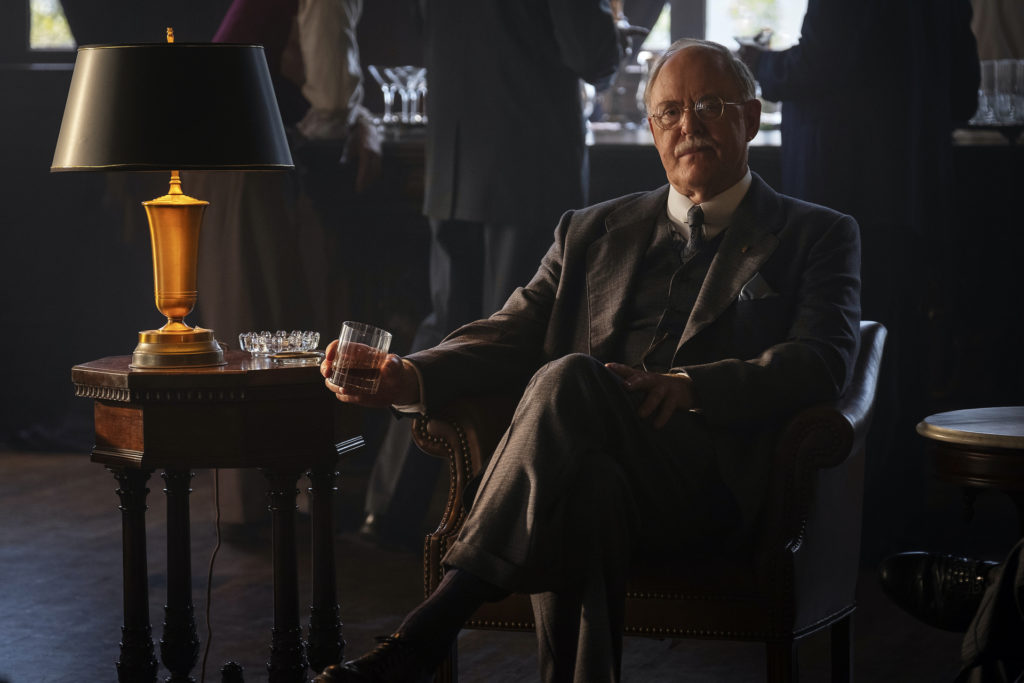 It seems however that E.B has the best intentions at heart, wanting to keep Perry occupied in his profession. As briefly mentioned before, it seems like Perry is carrying a heavy weight, of a long lost son, a broken marriage and a lover that acts as some sort of mother figure for him, at times. Money seems to be a little bit tight though, too. Perry’s apacitò humor is surely charming, at least from a watcher’s point of view, and it seems like we are going to have a whole lot of fun with good old Perry and his little camera. The silent ‘click’s is already on their way to becoming an iconic nuance of television.

After the brilliant I Know this Much is True, it seems like HBO is currently better at producing mini-series than original full Drama shows, Perry Mason surely had my curiosity from the beginning,; from the opening scene with Chubby- it sure got my attention. The story is captivating and the performances are all top-notch, and I can’t wait to see what Howard Korder has in store for viewers for the remainder of the investigation of the hideous crime the series sets up.