At the time of writing this article, HBO announced that Perry Mason was renewed for a second season.  This is no surprise, for mainstream critics and the writers at HBOwatch.com have given this reimagining of the classic CBS series laudatory reviews.  From a monetary standpoint, the premiere had more viewers that Watchmen.   Perry Mason is well on its way to being one of those HBO masterpieces that are discussed long after its series finale.  Spoilers ahead. 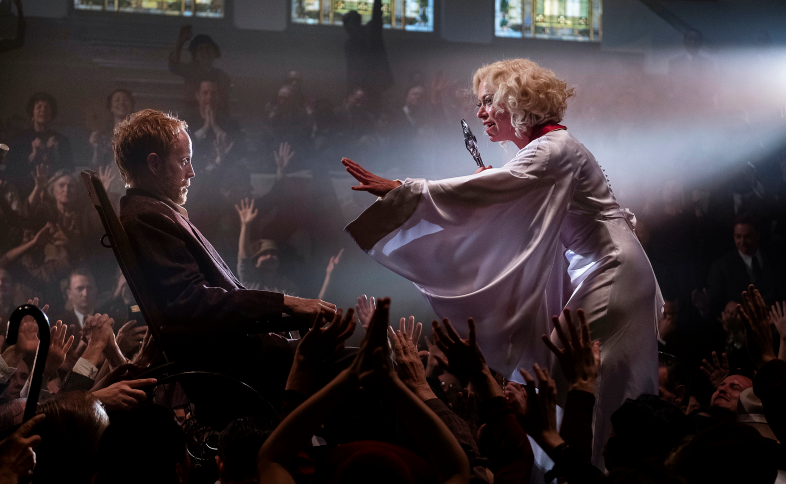 Chapter 5 expertly grows its already profoundly deep supporting characters. The well-intentioned but fanatical Alice McKeegan convinces her mother to utilize church tithes to post bail for wrongfully charged with murder Emily Dodson. Perry Mason shines by showing the atrocities of the religious and secular world, and this is done masterfully in a scene inside of the Radiant Assembly of God Church. Alice stages the healing of a crippled man, in hopes of convincing the congregation to keep ousted religious leaders out of control of the political swaying and money-making church. Alice is a true believer, but exploits the weary, so much that Emily believes that she can resurrect her deceased son. Alice may have sprung Emily from a terrible physical and mentally hampering psych ward, but this false prophetess is causing equal harm.

In a transitory yet poignant moment, Officer Paul Drake is growing tired of putting a lid on the truth behind the massacre of the Dodson baby’s kidnappers.  His superiors urge him to look the other way and his wife initially concurs.  However, Mrs. Drake sees the strain that remaining silent has put on her husband.  For even if this intense situation did not exist, a black man in the 1930s was meant to be briefly seen and not heard.  Officer Drake vows to fulfill his civic duty by revealing the truth. 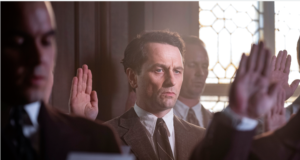 John Lithgow’s E.B. Jonathan, the mentor and employer of our titular character succumbed in the previous episode. Jonathan took his own life due to the corruption surrounding his client’s case. His secretary honorably hid his suicide to save his pride, having the public believe that he died of natural causes. Now Emily’s case is solely in the hands of the adept but sometimes inebriated Mason. His time under Jonathan qualified him as an apprentice, and he passes the California BAR exam.  California is a state that does not require a law degree to practice law, and now we will officially have the courtroom pacing Mason that has become a part of literary and television lore.

Perry Mason is a near-flawless assortment of performances, directing, writing, and production.  Again, this is not a lazy remake, but rather an enticing reimagining of the source material.  This is not your grandpa’s Perry Mason.  Not because of the content that is analogous of the TV-MA rating, but because of the rich and complex narrative.  I enjoyed watching the CBS series (re-runs of course) with my grandparents and other senior citizens in my family.  However, it was known that Mason would win the case.  HBO’s take not only makes the outcome of the trial perplexing, but the fate of its characters is uncertain.  Is Emily Dodson complicit in her son’s death? Will Officer Drake’s quest for the truth be his family’s demise? Will a competent but trial newbie Perry Mason fare well in court?  We will get closer to these answers with the next episode that debuts in the coveted Sunday at 9pm on Home Box Office time slot.