I think that HBO’s Girls is my favorite show. This is a big shocker to me, personally, as after watching the first episode, I really truly hated it. It was incredibly uncomfortable, but strangely fascinating, and like a car crash, I couldn’t bring myself to look away. As we approach the end of the second season, I find myself already mourning the loss of my Sunday nights with Hannah and company.

In his March 12 recap of Girls Season 2, episode 9, Jacob Klein posed an interesting question to our readers. “Did Adam rape Natalia?” This is a question that my mind has been wandering back to revisit, even days later. After five re-watches, this is what I’ve come away with as my final answer.

My first impression of Natalia (Shiri Appleby) was that she wasn’t the kind of girl who would ultimately understand Adam (by Adam Driver) and his dark side. She showed us this very clearly in Sunday’s Episode, On All Fours, when she visited Adam’s apartment for the first (and I’d be willing to bet, the last) time. “It’s depressing… and darker, than you are.” She said to Adam, who then asked, “Does it make you feel differently about me?” Natalia tells him no, it doesn’t make her feel differently, however her eyes tell us that her feelings are already changing. Adam sees it too, and so the test begins.

When Adam orders her only all fours, a clearly uncomfortable, Natalia complies. Disgusted by the his filthy floor, she wishes for Purell, but crawls to his bedroom as demanded. The crawl is long and awkward, and the tension is nearly overwhelming. Impatience takes over and Adam tosses Natalia roughly onto the bed, saying “I wanna hit the walls of you,” before awkwardly mounting her from behind. Within seconds he’s moved over her, “finishing” on her chest as Natalia protests, “No! Not on my dress!” Her expression is pained and as he moves away, we’re treated to a pretty realistic shot of the aftermath. “I like, really didn’t like that…” she mutters, wiping off with his shirt as he apologizes, claiming to not know what came over him.

I think we all know what came over Adam. Stepping outside for some air, running into pants-less Hannah (Lena Dunham) on the sidewalk in the midst of a somewhat uncomfortable party-going experience, drinking for the first time in years, Adam is in no position to be making responsible choices. Adam is a dark and somewhat creepy guy. Hannah, understood him in a way, and perhaps due to her own personal quirkiness, was accepting of his extreme oddness. Seeing Hannah stirred up some pretty intense emotions that Adam didn’t quite know what to do with. Watchers of the series will recall that when Adam was engaged in conversation with Ray (Alex Karpovsky) about Hannah in Season 2, Episode 6 (Boys), it was clear that Adam’s feelings for Hannah were still extremely strong.

I think what he inflicted upon Natalia wasn’t rape at all, but a kind of a test to see if she could actually handle the real Adam. I believe that if she’d tried to leave, Adam wouldn’t have stopped her. Natalia never protested at any point, other than showing a bit of panic when he was about to mess up her dress. She could have, and probably should have protested, but she did not. Adam, while being a pretty smart guy, is not a mind reader, nor is he even a particularly intuitive person. While the experience was uncomfortable and upsetting for Natalia, I think it also was for Adam. It shouldn’t have happened, but if you look at it from another perspective, Hannah might have actually enjoyed it. I think for a person like Adam, that is somewhat confusing, as not all girls are going to react to his idiosyncrasies the way that Hannah did. Should Adam have just figured it all out? Was he even conscious of the fact that he was “testing” Natalia? Is it OK that his own needs took precedent over the needs of his partner in this particular sexcapade? 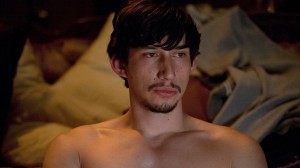 Opinions on the subject of rape are going to be strong and often emotional, and we’re all entitled to our thoughts concerning the subject, nonetheless. I think that one  of the things that I love about Girls is that every episode leaves you with something to ponder. Whether funny, sad or just plain shocking, I finish every episode with my head full of questions. What actually was that substance that they tossed on Nattie’s chest?  Is Adam really a bad guy? Is Hannah really, truly crazy? Will we ever look at a Q-tip the same way again? The Girls season finale airs this Sunday and I truly cannot wait to find out what we’ll be left to ponder over the off season. I know I, for one, will be waiting with bated breath for Season 3 to begin.