What a surprise to see, as a lead-in to the final installment of the limited series SHARP OBJECTS, 1 minute 12 seconds of TRUE DETECTIVE’s third season. It heavily features the season’s lead Mahershala Ali including voice-over to help set a tone. If you haven’t seen it yet, have a go –

The tone of the teaser seems reminiscent of Season One. The reflective, questioning thoughts of Ali’s Wayne Hays, the glimpses of a dark and uncomfortable natural setting, the setup for a deadly mystery all add up to what we want from Nic Pizzollato and TRUE DETECTIVE. Get over it, even Season Two accomplished that, it was just largely overshadowed by Season One’s strength.

Now we look forward to Season Three, deep in the Ozarks, to draw us in come January on HBO. In this clip, we are being set up for a disturbing mystery that extends decades. It is something that is not resolved within months of the crime but lingers, perhaps unsolved, until Wayne Hays is years older. We see Hays in both stages of his life, the young detective with a family and then years later with the gray hairs and years of worry & stress on his face still very much affected by the case in question. That case, as indicated by the imagery seen in the clip gives us what appears to be missing children, an angered parent as seen by the portrayal by Mamie Gummer, cryptic messages, dark recesses, a person stuffed in a car trunk and a shootout.

We’ve talked of characters before, but one more time here is some of the key players. Mahershala Ali has been cast as the lead character, playing Wayne Hays, a state police detective from Northwest Arkansas. Ray Fisher plays Wayne’s son, Freddy Burns; Carmen Ejogo plays Amelia Reardon, an Arkansas schoolteacher with a connection to two missing children in 1980; Stephen Dorff plays Roland West, an Arkansas State Investigator whose career has been influenced by a baffling crime; Scoot McNairy plays Tom, a father who suffers a terrible loss that ties his fate to that of two state police detectives over 10 years. 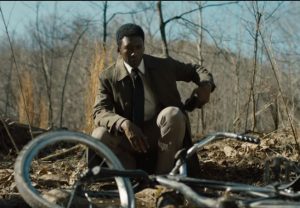 Some would say that they wish the exploits of Season One’s Hart (Harrelson) and Cohle (McConaughey) could play on forever. But with TRUE DETECTIVE being an anthology series about detectives and their jobs the series has the opportunity to create different personalities, locales and scenarios to keep the series forever changing. There is no limit to what Pizzolatto could create to keep us guessing instead of locking into two detectives, as awesome as they were, in the same environ season after season. Come on, look how totally different Season Two was? Soon, it will change up again with Season Three.

The latest, will all play out for ten episodes beginning sometime after the New Year. We will keep you posted on the exact debut date and a full trailer as they become known. Get ready for TRUE DETECTIVE once again.