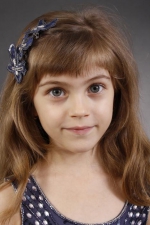 Update 11/13/13: It has since come to light via her modeling CV that young Miss Alexandru will be playing a Child of the Forest.

According to her agency’s website, 10 year old young actress Octavia Selena Alexandru has been cast in Game of Thrones for the upcoming fourth season.

According to the information we currently have, Octavia is credited as “The Child of the Forest”. The presence of “the” would indicate that there is some more significance to her character, which leads me to believe her to be playing Leaf, or at least what amounts to that character. Leaf’s introduction would make sense given the recent casting of the Three-Eyed Raven.

Game of Thrones season 4 premieres in Spring 2014. We’ll provide an exact air date here when we have it.