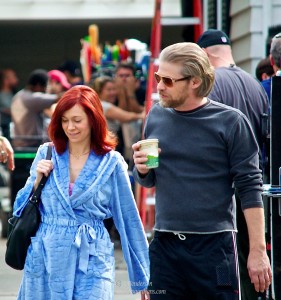 While there isn’t much news on what is to come for season 6, fans of True Blood can rest assured the cast is busy filming at various locations.

Fan site skarsgardfans.com, posted photos from January 23, 2013 – Season 6 Filming – that shows Carrie Preston (Arlene Fowler-Bellefleur), Todd Lowe (Terry Bellefleur) and Chris Bauer (Andy Bellefleur) entering and exiting the fantastic home used for the Bellefleur Estate. Though the shots were all interior, the cast waved and smiled for fans gathered around the home.

On January 31st, 2013, SpoilerTV.com reported the casting call for episode 6.03 as well as the title of that episode, Hard Rock Times. Without spoiling you, I can say the episode will be Sookie/Jason-centric and will include flashbacks. Be warned, you will be spoiled if you click on the following link – Episode 6 Title and Casting Call.

On the same day skarsgardfans.com reports fan sightings of filming outside what used to be a home used for the intro of an old favorite, Benson!  A warning: the photos are spoiler heavy, as is the article. You can check it out here.

Since we all know Waiting Sucks, hopefully these reports will satiate our True-Blood-lust for now.