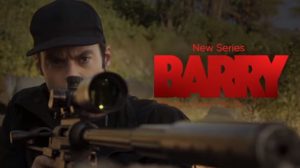 It appears we are going to have to pay close attention to the HBO schedule in 2018. With new series showing up, and limited series the norm nowadays, the schedule is all scrambled. We have official notice now of two comedies coming up in March. One of them is completely unexpected.

First, we had a hint in promos that Bill Hader’s BARRY was coming this spring and it now has been stated it will debut in March. Here is the official notice:

BARRY is a dark comedy starring Bill Hader as a depressed, low-rent hitman from the Midwest. Lonely and dissatisfied in his life, he reluctantly travels to Los Angeles to execute a hit on an aspiring actor. Barry follows his “mark” into an acting class and ends up finding an accepting community in a group of eager hopefuls within the LA theater scene. He wants to start a new life as an actor, but his criminal past won’t let him walk away – can he find a way to balance both worlds? The eight-episode series also stars Stephen Root, Sarah Goldberg, Glenn Fleshler, Anthony Carrigan and Henry Winkler. The series was created, executive produced and written by Alec Berg and Bill Hader.

The provided Teaser sets it up well so take a look.

The other series, as just reported, is SILICON VALLEY sans T. J. Miller. We didn’t see that coming as it usually runs late April into June each year. That tells us that without GAME OF THRONES and with limited series like SHARP OBJECTS that 2018 will be a year full of surprises as the schedule changes up. Check back with us and we will keep you up to date. Now, what are your thoughts on BARRY? Looking forward to it?