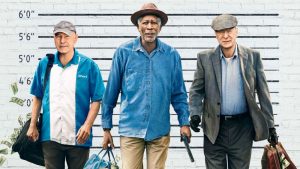 HBOWatch Editors were not able to line-up a writer to review GOING IN STYLE. That doesn’t mean we don’t want to draw your attention to this PG-13-rated geriatric crime comedy. It is actually a remake of a 1979 movie directed by Martin Brest. The original starred George Burns, Art Carney and Lee Strasberg while this time around, as you can tell by the picture above, we get Morgan Freeman, Michael Caine and Alan Arkin.

In both movies the character’s name and plots are similar it is just that one movie modernizes the situation. Joe (Burns or Caine), Al (Carney or Arkin), and Willie (Strasberg or Freeman) are three senior citizens who share a small apartment in New York City. They live off social security checks and spend their days sitting on a park bench, reading newspapers, feeding pigeons, and fending off obnoxious 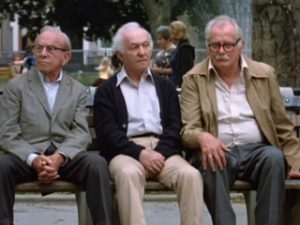 children. It’s a dull life, and finally, Joe is driven to suggest something radical to break the monotony; why not go on a stickup? None of them have a criminal history but just planning the bank robbery puts a new spring in their step. Regardless of whether it is set in 1979 or 2017 the tale still passes comment on the elder set and their place in society.

The tone of the original movie, if my memory serves, played strong with the serious issues facing elder citizens; it was those stresses that drove the trio to the heist to begin with. Since the latest movie shares a similar description the question remains on whether the 2017 version is heavy on the drama or favors comedy? The other question is whether the onscreen chemistry between Caine, Freeman & Arkin is there? The trailer will offer a clue:

And the rating system of choice leaves a clue as well. Rotten Tomatoes liked the cast, which includes Ann-Margret, Christopher Lloyd, Matt Dillon and Kenan Thompson, but that seems about it. However, the verdict is still out. If anyone cares to watch GOING IN STYLE (from 2017) you can catch Saturday, December 16 at 8:00pm on HBO or its streaming sites. Come back here and give us your two cents worth, why don’t ya?