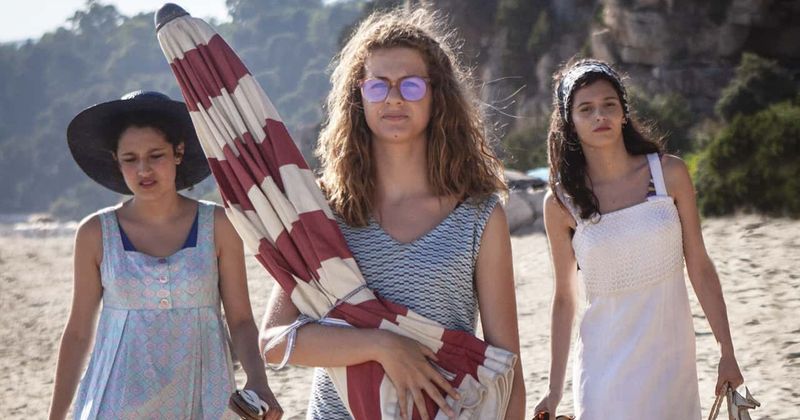 Reaching the midway point of the season, we celebrate Rino (Gennaro de Stefano) and Pinnucia’s (Federica Sollazzo) wedding and she’s visibly showing by that point.  When an old biddy makes a comment about Lila (Gaia Girace) not being sturdy enough to have children, Lila is understandably upset.  I think everyone could have done without the wine throwing or storming off though.  I’m curious why it would bother Lila so much when she doesn’t love Stefano (Giovanni Amura).  I mean, women were and often are still blamed for problems with conception when in reality it’s the men’s fault.  I can’t imagine she actually cares about having Stefano’s kid though so I’m not sure why she reacts that way.  A doctor has recommended her to swim regularly to get strong enough to bear children.  Stefano suggests going to the beach for the summer with Pinuccia and Lila’s mother.  Lila really only cares that Elena (Margherita Mazzucco) comes along too.  She even offers to pay her the wages she’ll miss not working at the bookstore.  Why not?  Lenu’s only insistence is to make it the beach at Ischia, where she’ll have a chance of seeing Nino (Francesco Serpico).

After a brief and uncomfortable encounter with Nino’s father Donato (Emanuele Valenti), the girls settle in for a relaxing time at the beach.  Eventually, they run into Nino and his flatmate who become regular beach companions.  With the husbands coming for a visit over the weekend, Lenu is anxious.  How lonely as a single girl to be isolated with your married friends and then stuck home when their spouses come for the weekend?  Talk about the fifth wheel.  And even with Lila’s mother to spend time with, it gets boring always spending time with someone far older than you.  Lenu retreats into her books.  Which Lila later inquires about.  Hmm, interesting that her sudden passion for reading has been reignited.  Might it have anything to do with a well-read young gentleman currently spending time with you at the beach when your husband’s not around?

Nino offers a morning beach walk with Lenu approaching a weekend of visiting husbands since the newlyweds sleep in.  Lenu is incredibly excited about it, though trying to keep cool.  Pinuccia is upset and missing Rino and just dealing with being a pregnant woman.  I haven’t done it, but I’ve seen others and it is utterly exhausting being pregnant.  And now Rino’s all pissy and breaking dishes because she’s stressed and upset?  Dude, you need to take like a dozen chill pills and remember she’s creating a freaking life inside her and she doesn’t need to worry about your happiness right now.  Lila comes to Lenu in the wee hours of the morning with something to tell her.  Well, that’ll put a damper on a friendship.  It’ll be interesting to see how things progress with the second half of the season.  So far I’ve appreciated being able to run away to Italy for an hour once a week.

Before you go, check out the promo for next week’s episode: