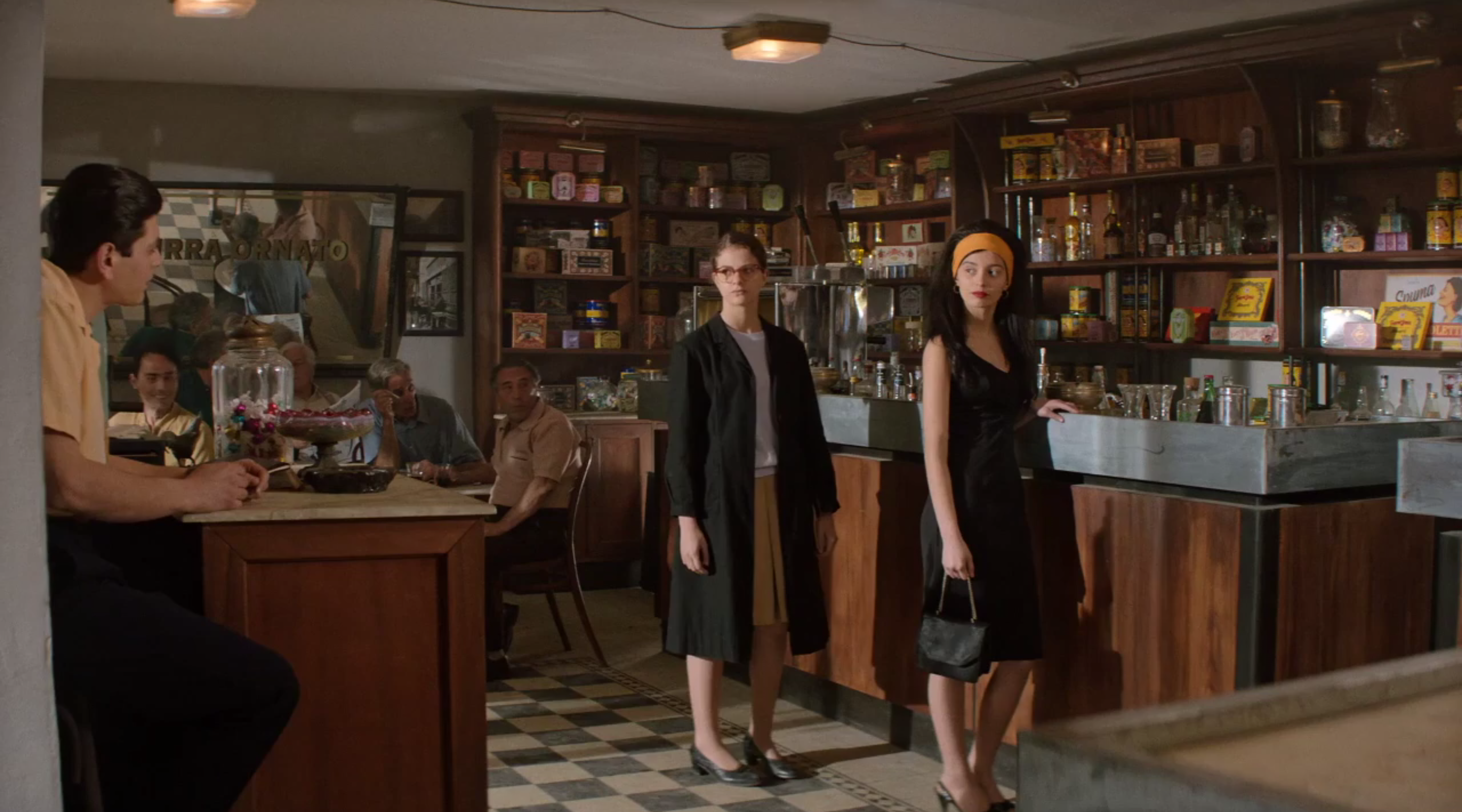 This episode picks right up after the last with Lila (Gaia Girace) preparing herself to tussle with the Solara brothers (Elvis Esposito, Alessio Gallo) and Elena (Margherita Mazzucco) tagging along behind.  As much as Lila is doing this to attempt helping Antonio (Christian Giroso) get out of serving in the military, she’s also using it to irritate her husband, Stefano (Giovanni Amura).  She garners some valuable information but also learns about a new shoe store the brothers are opening with Stefano.  It’s one big cat and mouse game for all of them, baiting each other and working each other over.

Eventually, the bargaining chip is a picture of Lila from her wedding day, hanging in the dress shop.  It’s a great advertisement for the store, but Stefano is jealous and he knows the Solaras want it.  He enlists Elena’s help with Lila.  He wants her to be more like a wife.  Well, I hate to break it to you, you’re part of the problem, bro.  Maybe stop humiliating and beating your wife?  Maybe if you thought of her as a partner and not an enemy…but then that’s taking responsibility for things and who wants to be adult enough to do that?  As Lila so poignantly puts it, “He can make all the money he wants with whoever he wants, but he can’t have a woman like the one he has in mind.” And that’s the bottom line.  She’ll never be happy or even attempt to give Stefano the pleasant life he wants because he lied to her from the beginning.

Meanwhile, Elena tells Antonio that the Solaras will help him and he’s pissed at how he looks sending a woman to ask for help.  They break up and frankly, you’re better off, Lenu.  Antonio is so mopey about everything.  He’s jealous over Nino (Francesco Serpico) who literally doesn’t know you exist.  Move on, Lenu.  Focus on your studies.  When Lila’s picture comes home, Lila bets it will be a matter of time before Stefano hands it over to the Solara brothers.  Elena disagrees and is quick to jump to Stefano’s defense after he drags her out to pick up the picture and begs her help.  He wants Elena to convince her to be more wifely so the poison inside her will stop killing their potential offspring.  Yikes.  No wonder Lila can’t stand you, Stefano.

Lila says if Stefano does hand over the picture then Lenu must pass her final year with only As and A+s.  If Stefano doesn’t hand the picture over, Lila will find a private school and sign up for lessons.  Lila’s either going to get smarter or be right, so she wins either way.  It turns out Stefano does fold and gives the picture over to appease the Solaras.  Doesn’t really feel like a win, does it?  Elena goes to see her old teacher (Dora Romano) who is quite ill.  She entreats Elena to keep at her studies and try hard.  The visit ends up giving Elena a fresh perspective regarding Lila and children.  Once you become a parent, you don’t live your life for you anymore.  You’re living it for your kids and what you can do for them as a parent.  Giving up yourself in that way is a hard choice, especially when it isn’t a choice.

Before you go, don’t miss the promo for My Brilliant Friend, Episode 3: