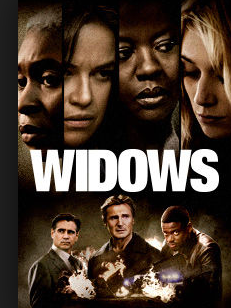 Do you want to see some kick-ass dames? Well, I think this movie just might have them. WIDOWS is a 2018 heist film directed by Steve McQueen from a screenplay by McQueen and Gillian Flynn. The plot follows four Chicago women who attempt to steal $5 million from the home of a prominent local politician in order to pay back a crime boss from whom $2 million was stolen by their husbands before they are killed in a botched getaway attempt. A British-American co-production, the film features an ensemble cast consisting of Viola Davis, Michelle Rodriguez, Elizabeth Debicki, Cynthia Erivo, Colin Farrell, Brian Tyree Henry, Daniel Kaluuya, Jacki Weaver, Carrie Coon, Robert Duvall, and Liam Neeson.

Let’s look at who is who. The husbands killed in the botched heist are Liam Neeson, John Bernthal, Manuel Garcia-Rulfo & Coburn Goss. Their widows respectively are Viola Davis, Elizabeth Debicki, Michelle Rodriguez & Carrie Coon (THE LEFTOVERS). Getting caught up in the heist also are Cynthia Erivo and Colin Farrel but clearly, the widows take the lead.

Apparently, Jennifer Lawrence was circling the work but that fell through and Viola Davis stepped in. Doing so was not bad news for her because she walked away with some awards for her role including Best Actress honors in 2018 from the BAFTA Awards & Satellite Awards. The cast as a whole won Best Ensemble Cast from a number of Film Critic Guilds as well. Perhaps the trailer below will help you to see why those accolades were granted.

Variety praised McQueen’s direction and Davis’ performance and wrote, “The strongest aspect of Widows is the way the movie gets us — and keeps us — rooting for its desperate-living heroines. They’re past the point of just wanting to have fun (the subtext of almost every heist movie); they’re less concerned with comeuppance than sheer survival.” But Entertainment Weekly said ” it is not clear exactly what kind of movie(s) Widows wants to be” and that it feels like a “crazy-quilt patchwork of other, better films.”

Most seemed to like the movie well enough and that is indicated by our go-to aggregator. Want further information about WIDOWS? Visit the movie’s official site or better yet just take it the movie which clocks in at 130 minutes. It premieres SATURDAY, JULY 27 at 7:45pm and of course can be found on HBONow/Go.