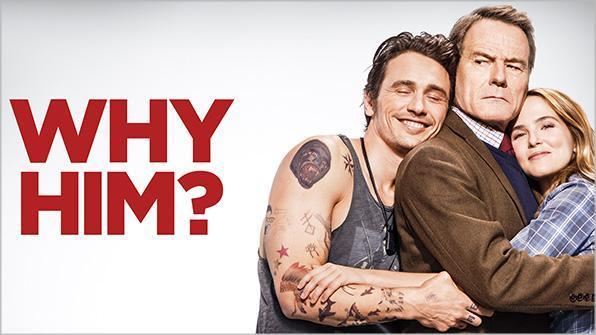 HBOWatch Editors were not able to line-up a writer to review WHY HIM? That doesn’t mean we don’t want to draw your attention to this R-rated comedy that came out December of last year. One reason it might appear on the schedule this month is because it stars James Franco, who is playing Vincent & Frankie Martino on THE DEUCE right now. He only appears in this movie as one character named Laird Mayhew. The title question refers to him. Even without knowing the premise of the movie you get the sense that someone is not happy that Laird is in the picture.

Details straight from the producing studio, Twentieth Century Fox sums it up: Over the holidays, Ned, an overprotective but loving dad, and his family visit his daughter at Stanford, where he meets his biggest nightmare: her well-meaning but socially awkward Silicon Valley millionaire boyfriend, Laird. The rivalry develops and Ned’s panic level goes through the roof when he finds himself lost in this glamorous high-tech world and learns that Laird is about to pop the question. Daddy Ned is played by Bryan Cranston, the Mrs. by Megan Mullally and Daddy’s little girl, Stephanie, by Zoey Deutch.

Now, either one of two situations is going to play out here. The rich guy is either going to appear to be a real douchebag, but come around as a lovable guy in the end for dear old Dad to accept him or he is still going to be a douchebag and Daddy tries to save his daughter from a grave mistake, but she digs him for the douchebag he is and Dad just gives into his daughter’s wishes; He may grumble but in the end she’s happy. Wither way Laird gets his girl. They are subtle differences but a few scenes could play out differently depending on the approach the film takes. I guess you’ll have to watch it to decide….or check the trailer.

There is no question what type of guy Laird is…or should we not judge a book by its cover. Again I guess you’ll have to watch. Be warned though it is a raw and profane holiday flick so watch out. Rotten Tomatoes says to watch out as well.

Yes, it may be the “tired father-fiancé formula” but you just might be cut out for Franco brand of funny to like this one. I guess you’ll have to watch it to decide. Oh, I said that already. WHY HIM? Plays across HBO’s platforms after its debut this past Saturday night (09.30).