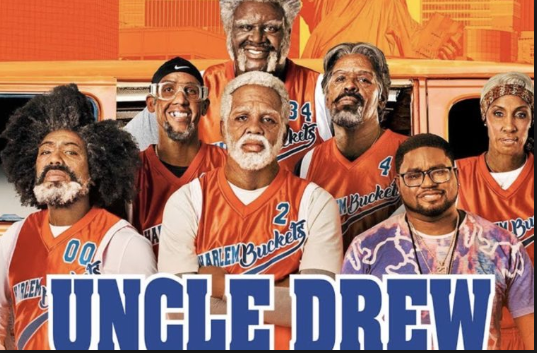 HBOWatch Editors were not able to line-up a writer to review the comedy UNCLE DREW, but that doesn’t mean that we don’t want to draw your attention to it. It was directed by Charles Stone III the director of Drumline with Nick Cannon, Mr. 3000 with Bernie Mac and ABC’s Black-ish. It was written by Jay Longino and appears to be his biggest work so far. Below is a look at what they crafted when they assembled the following cast. It has It stars Kyrie Irving as the title character along with former NBA players Shaquille O’Neal, Chris Webber, Reggie Miller, and Nate Robinson, as well as former WNBA player Lisa Leslie. Along for the fun is Lil Rel Howery, Erica Ash, J. B. Smoove, Mike Epps, Tiffany Haddish, and Nick Kroll.

I don’t know about anyone else but I don’t even remember ads for this one being in the cinemas or that the Uncle Drew character preexisted as a Pepsi Zero gimmick for that matter. It premiered June 29 of last year and faced competition like Jurassic Park: Fallen Kingdom and Incredibles 2. The box office fell off rather quickly after a $45 million opening, but that doesn’t mean it is an awful movie necessarily.

So, what is it about that it showcases pro basketballers? IMDb posts this summary – After draining his life savings to enter a team in the Rucker Classic streetball tournament in Harlem, Dax (Lil Rel Howery) is dealt a series of unfortunate setbacks, including losing his team to his longtime rival (Nick Kroll). Desperate to win the tournament and the cash prize, Dax stumbles upon the man, the myth, the legend UNCLE DREW (NBA All-Star Kyrie Irving) and convinces him to return to the court one more time. The two men embark on a road trip to round up Drew’s old basketball squad (Shaquille O’Neal, Chris Webber, Reggie Miller, Nate Robinson, and Lisa Leslie) and prove that a group of septuagenarians can still win the big one.

The Guardian states – “It coasts along on recognition and sports star-status and not enough has been done on the script.” Deadline says – “Who knew a bunch of NBA all-stars could turn out to be so funny and such good comic actors? Uncle Drew scores on many fronts as the surprise feel good movie of the summer.” RT had this tally –

So, do you want to see what chemistry these players have? Do you want to see if the old-age makeup looks as bad as it does in the promo stills for this one? If so, then seek out UNCLE DREW which premieres SATURDAY, FEBRUARY 02 at 8:00pm. Come back and let it know what you think of it.