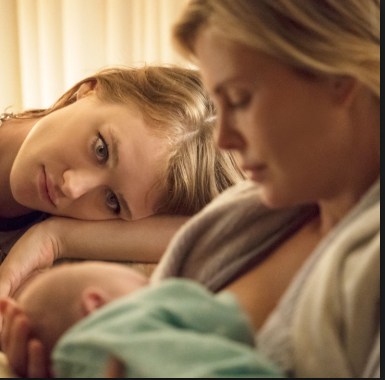 HBOWatch Editors were not able to line-up a writer to review TULLY, but that doesn’t mean that we don’t want to draw your attention to it. In this dramatic comedy, Charlize Theron plays a New York suburbanite drowning in the challenges of motherhood who finds a lifeline in a worldly night nanny who comes to help her. The mother, named Marlo Moreau, and her husband Drew, played by Ron Livingston, have two children and another on the way. Marlo’s brother Craig (Mark Duplass) promises to hire her a nanny to help with the growing household, though Marlo declines.

It proves to be a good idea, however, as once Mia is born Marlo goes into post-partum depression. Before you know it, walking into her life comes Tully, played by Mackenzie Davis. Marlo and Tully develop a close friendship over the course of the nanny’s employ. Tully proves to be an exceptional nanny and takes the pressure off of Marlo enough to make parenthood less of a chore and to give Marlo time to adjust.

I guess the question is as you go through this movie is whether or not Marlo is easing out of the depression and going to take control of her life & family. You got to know that with Theron in the role that some dramatic angst has got to surface, right? You’ve got to know that the depression hits rock bottom, right? I don’t have to see the movie to know what goes down here. Is Tully that good to help pull her out?

I guess you’ll have to watch TULLY in order to find out. Find it on HBO & its platforms starting at an earlier time than usual because HBO Films: BREXIT also appears on movie night. TULLY debuts Saturday, January 19 at 7:20pm.

TULLY, directed by Jason Reitman & written by Diablo Cody got rather favorable reviews though some cited it did not treat mental illness as well as it should. Peter Travers, of Rolling Stone, stated, “When the film takes a sharp turn and veers off-course in its final third, you hold on because Davis and Theron make sure you do. Together these two dynamite actresses cut to the soulful core of a movie that turns out to be funny, touching and vital.” Rotten Tomatoes posted this –