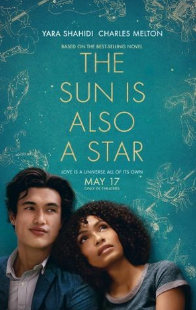 The Editors could not line up a writer to review this drama but that does not mean we don’t want to draw your attention to it. First off, I ‘ve got to wonder if anyone who is caught up in the hustle & bustle of the Holiday season has the time to sit for a moment for a Saturday night movie debut. Or perhaps HBO knew that most people didn’t have the time and just stuck in this movie? It was not a box office favorite when it hit the big screen (only $6 million) but I’m getting ahead of myself.

THE SUN IS ALSO A STAR is a 2019 American teen drama film directed by Ry Russo-Young and written by Tracy Oliver, based on the young adult novel of the same name by Nicola Yoon. The film stars Yara Shahidi (Grown-ish) and Charles Melton (Riverdale), and follows a young couple who fall in love, while one of their families faces deportation. The film starts with a voiceover from teenager Natasha Kingsley on the Big Bang and how it created the whole universe and the world we live in. She has no problem wrapping her mind about the universe but doubts she has the ability to understand the human condition. She continues about how she thought it would take her whole life to understand the human heart, but she surprises herself perhaps when it only takes her a single day. The viewer sits back to witness it.

Okay, but to pull that off the characters need believable chemistry and the actors need to have it on a certain level also. Do they? That is the million-dollar question. Do they? Maybe thew trailer will offer a clue.

‘Offer a clue’; Hell, that one just told the whole damn story, didn’t it? Also, kind of creepy that she’d link up with a complete stranger like that, but whatever. I’m convinced HBO just used this as filler on a busy weekend. Not to just drop a harsh note and run here are a few positive reviews for you: “The filmmakers have made somewhat hokey, unbelievable material into something thoughtful and artful.” – Tim Brayton of Alternate Ending; “Because of the irresistibly charismatic leads, this cliché-riddled love story works despite how superficial (and at times, unbelievable) it may be.” – Louisa Moore of Screen Zealots; [It] ‘unapologetically embraces deep-dish romantic fantasy and unashamedly exults in the most shameless coincidences imaginable. If that sounds noticeably lacking in irony, sarcasm and snark, it’s just going to have to be that way.” – Kenneth Turan of Los Angeles Times. But Rotten Tomatoes says – 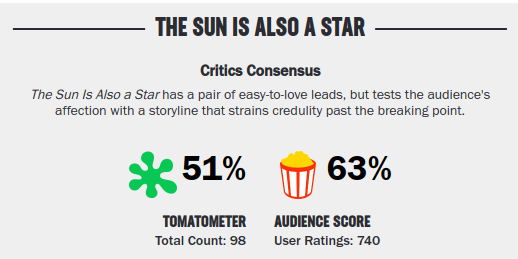 So, do they have chemistry or not? Enough of the critics lean towards the affirmative but I guess it is up to the viewer to decide for themselves. The more deciding factor in the matter is whether or not you can accept the odd plot contrivances that they are not ashamed to use to get this story told. Discover THE SUN IS ALSO A STAR and weigh all that for yourself. If you really want to you can find the time as it will appear across HBO’s channels and sites for a while. THE SUN IS ALSO A STAR debuts Saturday, December 21 at 8:00pm.