This movie appears to almost take on two different themes, but will somehow blend into one nice story, I’m sure. First, we have an estranged daughter, named Mae Morton, trying to investigate her famous but deceased mother and coming to terms with who she was. On the other hand, we have a reporter, named Michael Block, also investigating the same woman and ending up connecting with and romancing the daughter. All this happens due to the title photograph. But is the movie a drama about reconciling a broken family or a romantic movie or simply, both?

It is a 2020 American romantic drama written and directed by Stella Meghie. It follows the estranged daughter (Issa Rae) of a famous photographer who falls in love with the journalist (Lakeith Stanfield) who is investigating her late mother’s life. Her name is Christina played by Chante Adams. Chelsea Peretti, Lil Rel Howery and Courtney B. Vance also star. The film was released in the United States on February 14, 2020, by Universal Pictures.

Clearly, if the trailer is any indication, the movie is more about the relationship that blooms between Mae & Michael but the audience must learn by looking into Christina’s life that Mae’s relationship parallel’s her mother’s. Does Mae come to that realization as well? If she does the question of whether this movie clicks on all cylinders hinges on how well that realization plays out, plus there is the whole question of the chemistry between Mae & Michael and the actors who portray them.

Well, the critics seem favorable that all that falls into place. The Observer says, “All of it combines into not only a profoundly romantic experience but also an exploration of a number of different kinds of love and connection” and the Financial Times notes to, “Revel… in the subtle back-and-forth of becoming smitten, the glances, touches, silences. Think of it as a dance movie, a good one.” But, to be fair some, like FilmWeek called it “too soft and soupy.” RT rates it below: 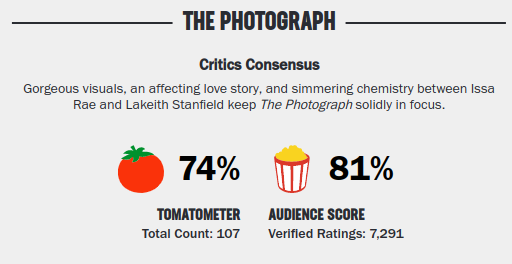 In for a romance with Issa & Lakeith on a December night? If so, find THE PHOTOGRAPH debuting Saturday, December 05 at 8:00pm on HBO and its streaming sites.