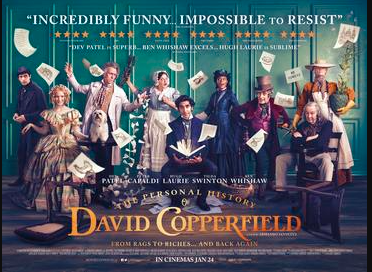 Simply put the movie THE PERSONAL HISTORY OF DAVID COPPERFIELD, which debuts SATURDAY, May 15 at 8:00pm, offers the life of David Copperfield as chronicled from his birth to the present day. The catch is it is with a very diverse & modern cast told from the creativity of Armando Iannucci. Yeah, you know, the creator and original showrunner of award-winning VEEP?

It is not a work filled with the classic British stuffery (is that a word?) or sprinkled with the salty type of dialog that came for Louis-Dreyfus and company but it is a fun romp nonetheless. Now, is a perfect time to take in the trailer:

The work is a 2019 comedy-drama film written and directed by Armando Iannucci, based on the 1850 Victorian-era novel David Copperfield by Charles Dickens. Oh, that David Copperfield! It stars Dev Patel as the title character, and Aneurin Barnard, Peter Capaldi, Morfydd Clark, Daisy May Cooper, Rosalind Eleazar, Hugh Laurie, Tilda Swinton, Ben Whishaw and Paul Whitehouse. The world premiere was at the Toronto International Film Festival on 09.05.19. It was theatrically released in the United Kingdom on 01.24.20 by Lionsgate UK and in the United States on 08.28.20 by Searchlight Pictures. It now makes its debut on HBO & HBO Max. 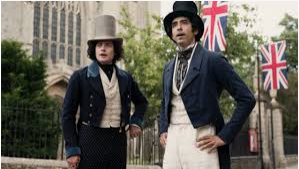 David has an idyllic life and is taken to visit the family of his nanny Peggoty (Daisy May Cooper) in their boathouse in Yarmouth. When he returns, his young and widowed mother Clara (Morfydd Clark) has married the sinister and cruel Mr. Murdstone (Darren Boyd), who beats the boy. The abused David Copperfield (Dev Patel) is sent to work in Murdstone’s factory where he lodges with Mr. Micawber (Peter Capaldi) and his family, who are pursued by their creditors. After being told of his mother’s death and funeral, David escapes from his life of drudgery and finds his wealthy aunt Betsey Trotwood (Tilda Swinton) and her lodger, the eccentric Mr. Dick (Hugh Laurie). After troubling problems with Steerforth (Aneurin Barnard) and Uriah Heep (Ben Whishaw), Betsey Trotwood finances David’s ambition to become a gentleman and author. Let’s also throw in there that you can catch Gwendoline Christie (GoT) in a role too.

This movie became the first theatrical film production of the novel in 50 years and was generally well-liked. It even won a few awards in the UK including Best Casting and Best Screenplay. From Britain’s The Observer, one critic stated “It really is a wonderfully entertaining film, managing to both respect and reinvent the novel from which it takes its lead.” Rotten Tomatoes compiled the critics and found this conclusion:

So, there you go. THE PERSONAL HISTORY OF DAVID COPPERFIELD sounds like a fine little escapade to seek out on HBO or HBO Max. It is uploaded and waiting as of 05.15.21. Enjoy.