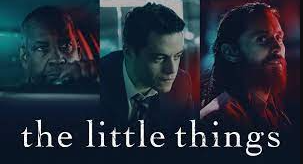 THE LITTLE THINGS; it had its run theatrically and for one month on HBO Max and now it is back to appear on HBO. It just debuted on Saturday, June 26. Did you catch it? This crime thriller was written and directed by John Lee Hancock and produced by Hancock and Mark Johnson. Set in early 1990s Los Angeles, the film follows detectives (Denzel Washington and Rami Malek) who investigate a string of murders, which lead them to a strange loner who may be the culprit (Jared Leto). The film also stars Chris Bauer, Michael Hyatt, Terry Kinney, and Natalie Morales.

It seems Washington’s character, Joe “Deke” Deacon, is lost in the fact that one murder case of his went unsolved years ago. While assisting the younger LASD Detective Jim Baxter, Malek’s character, they come across a homicide case with a similar pattern and M. O. as the unsolved case. It opens up a stress-filled workload and old wounds. Leto is the lead suspect, Albert Sparma. Is he the guilty party or just the scapegoat to ease Deacon’s troubled soul? He sees Baxter being consumed by the case and knows how such obsession can cripple a life. Do all the ‘little things’ add up to the proper conclusion? You need to watch the movie to find out.

The Chicago Sun-Times states, “Malek and Washington are electric together in this atmospheric, moody thriller that will keep you guessing and on the edge of the proverbial seat.” While the Guardian says, “There are little things here that work but the big problems are impossible to ignore.” RT sums it up with – 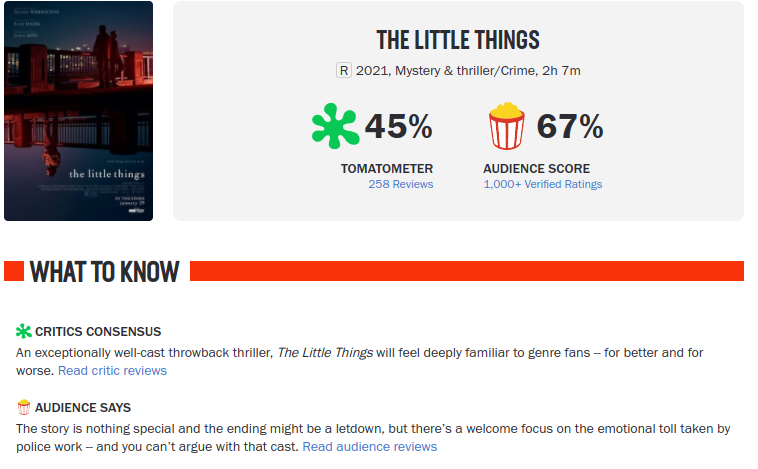 Decide for yourself. THE LITTLE THINGS is parked on HBO & HBO Max for a while. Do the big and little things add up to a good movie for you? Let us know.