THE LAST DUEL is by Ridley Scott. I feel that should be all I need to say. Then, I saw the trailer…

And now, that is all I should need to say. So, why is this movie just slipping onto HBO? THE LAST DUEL is not the Saturday night movie for this week, THE SUICIDE SQUAD gets that timeslot and THE LAST DUEL isn’t even appearing on HBO channels but is online only on HBO Max (for its subscribers) and play.hbonow.com (for HBO cable subscribers). Well, I guess, it is what it is; but we draw your attention to it. The work is a 2021 epic historical drama from a 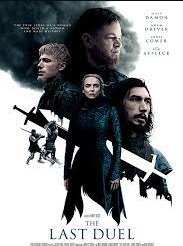 screenplay by Nicole Holofcener, Ben Affleck, and Matt Damon, based on the 2004 book The Last Duel: A True Story of Trial by Combat in Medieval France by Eric Jager. Set in medieval France, the film stars Damon as Jean de Carrouges, a knight who challenges his former friend, squire Jacques Le Gris (Adam Driver) to a judicial duel after Jean’s wife, Marguerite (Jodie Comer), accuses Jacques of raping her. The events leading up to the duel are divided into three distinct chapters, reflecting the contradictory perspectives of the three main characters. Affleck also stars in a supporting role as Count Pierre d’Alençon.

It all just seems a win-win. Good Will Hunting writers Damon & Affleck alongside Holofcener, who has given us great episodes of SEX AND THE CITY, SIX FEET UNDER, BORED TO DEATH, ENLIGHTENED, TOGETHERNESS, MRS. FLETCHER, plus Dreyfus/Gandolfini’s ENOUGH SAID, is a win. Envisioned by Scott is another win then add Adam Driver (GIRLFRIENDS) and Jodie Comer (Killing Eve) and we are winning it all day long. So, why just slip the movie on without wide coverage and fanfare? I guess the reason is that it is one of those 20th Century Fox films in that Disney/Warner deal I mentioned before.

As Rotten Tomatoes sums up – This movie is a cinematic and thought-provoking drama set in the midst of the Hundred Years War that explores the ubiquitous power of men, the frailty of justice and the strength and courage of one woman willing to stand alone in the service of truth. Based on actual events, the film unravels long-held assumptions about France’s last sanctioned duel between Jean de Carrouges and Jacques Le Gris, two friends turned bitter rivals. 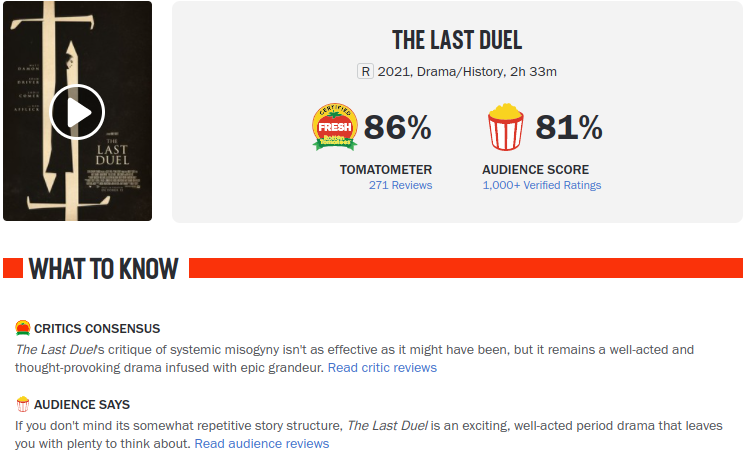