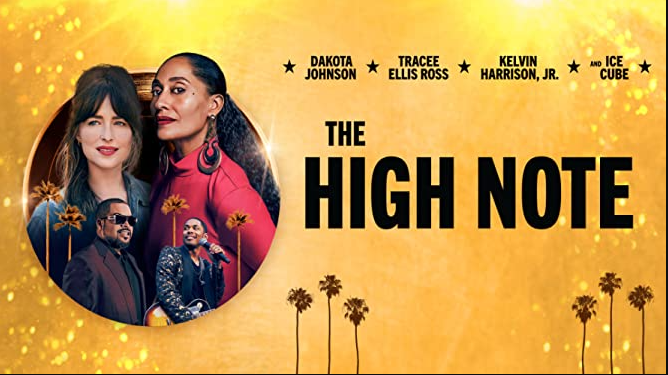 I guess you could say we are entering the new year on a high note but I don’t see it. The first movie debut of 2021 is THE HIGH NOTE. It is a comedy-drama directed by Nisha Ganatra (Transparent) and written by Flora Greeson. The film stars Dakota Johnson, Tracee Ellis Ross, Kelvin Harrison Jr., Zoë Chao, Bill Pullman, Eddie Izzard, and Ice Cube. Johnson is Maggie who is the overworked personal assistant to Grace Davis (Ross), a superstar singer whose talent and ego have reached unbelievable heights. Stuck running errands, Maggie still wants to fulfill her childhood dream of becoming a music producer. But when Grace’s manager presents her with a choice that could alter the course of her career, Maggie and Grace come up with a plan that could change both of their lives forever. The movie had a short theater release before such venues were shuttered due to pandemic protocol and went to VOD release.

Though this work doesn’t seem to click for me it did for many. I guess you can chalk it up to the right combination of people. Forbes said, “It’s leisurely-paced, relatively grounded and rooted in the specific pleasures of watching good actors play nice people who deal with their specific conflicts as nicely as possible.” In opposition, Variety stated it “can’t decide if it’s a behind-the-music-industry drama or a go-for-your-dream fairy tale” and that “the feel-good factor hovers over this movie like a fuzzy bland cloud.”

There is surely an interesting enough dynamic as Maggie continues to meet the diva’s demands while trying to forge her own way in the biz as she links up with potential clients and potential love too. So, if you miss going to the movies HBO is still trying to fill its Saturday nights with theatrical debuts. You can settle in with THE HIGH NOTE on SATURDAY, JANUARY 02 at 8:00pm or watch it at your convenience on the streaming sites.