HBOWatch Editors were not able to line-up a writer to review this timely social drama but that doesn’t mean that we don’t want to draw your attention to it. It is a shame I don’t always have the time to watch movies myself or I would have taken this one in. This picture is directed by George Tillman Jr. with a screenplay by Audrey Wells, based on the 2017 novel of the same name by Angie Thomas. The film stars Amandla Stenberg, Regina Hall, Russell Hornsby, K. J. Apa, Common, and Anthony Mackie, and follows the fallout after a high school student witnesses a police shooting.

The source material was Thomas’s debut novel, expanded from a short story she wrote in college in reaction to the police shooting of Oscar Grant on New Year’s Eve 2009. The book is narrated by Starr Carter, a 16-year-old black girl from a poor neighborhood who attends an elite private school in an affluent white part of the city. Starr becomes entangled in a national news story after she witnesses a white police officer shoot and kill her childhood friend, Khalil, who is black. She speaks up about the shooting in increasingly public ways, and social tensions culminate in a riot after a grand jury decides not to indict the police officer for the shooting. 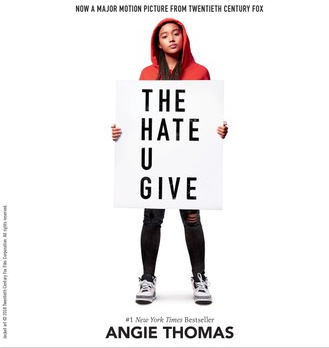 Amandla Stenberg (The Hunger Games, Everything, Everything) takes on the role of Starr Carter in the movie. With motivation from the right people, Starr is inspired to take a stand for injustice. One wronged death is one too many. Her parents, Maverick and Lisa, are played by Russell Hornsby (HBO’s IN TREATMENT) and Regina Hall (Girl’s Trip). Others in the story include Chris, Starr’s boyfriend (K. J. Apa of Riverdale), Common (The Chi) appears as Starr’s Uncle Carlos and Algee Smith (about to be seen in EUPHORIA) plays Khalil Harris the downed friend of Starr. Also appearing is Issa Rae of HBO’s INSECURE and Dominique Fishback of THE DEUCE.

As is the norm this movie has those critics who liked it and those not so much. Rolling Stone loved the lead, Stenberg. It states, “It is impossible to over-praise Stenberg’s incandescent performance, a gathering storm that grows in ferocity and feeling with each scene. Stenberg nails every nuance of a role that keeps throwing challenges at her, none more devastating than when it becomes impossible for Starr to remain stuck in neutral.” Slate Magazine says, “Given its intensely relevant subject matter, the film can’t help but churn up a lot of raw emotions—and the allusions to Michael Brown, Sandra Bland, and Emmett Till are reminders of the real-life sorrow that birthed this film—but Tillman’s anonymous direction is content merely to illustrate the screenplay without ever bringing it to life.” Our go-to aggregator though clearly shows that THE HATE U GIVE is a favored movie.

THE HATE U GIVE premieres Saturday, June 15 at 8:00pm across HBO’s platforms.