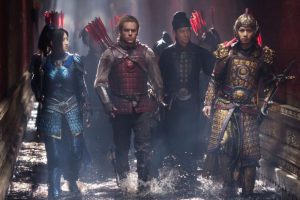 HBOWatch Editors were not able to line-up a writer to review THE GREAT WALL. That doesn’t mean we don’t want to draw your attention to this PG-13-rated fantastical action tale. We are not quite sure why we didn’t get someone in our stable of writers to offer an opinion because they jump at the chance at this type of movie, however, they also are not too keen on reviewing a flick that wasn’t that good. Were they trying to tell us something for not jumping at the offer?

THE GREAT WALL is a Universal Picture by famed Chinese director Yimou Zhang. Zhang, if you don’t know, is noted for House of Flying Daggers, The Bright Red Lanterns Hung High and other films. Perhaps Matt Damon and Willem Dafoe ended up in this movie because they were eager to work with Zhang. Below is a quick look at just what story they are in.

The opening text states that the Great Wall of China is one of mankind’s most enduring wonders. It spans over 5,500 miles and took over 1,700 years to build. It has protected the city from many dangers, some of which are known, and others that are legend. This story is about one of those legends. The story tells of three Europeans in search of the elusive powerful black powder that was mastered in China. They are held captive and end up in the middle of an epic battle on the Wall against some fierce monsters. Surely then, the movie is only as good as the monstrous horde that clashes with bandits and soldiers on the historic Great Wall.

The first English-language production for Zhang is the largest film ever shot entirely in China. Some of the scenes are surely shot at some of the best sections of the structure overlooking some large vistas. And it should have strong visuals coming from Yimou Zhang. Even a glimpse of the trailer shows off his stylized imagery. But, is the visual style enough to hold the movie together? And, again we got to ask, are the monsters cool enough?

Watch it and let us know. Here is what Rotten Tomatoes had to say: