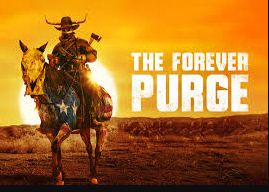 Catching up on some movies now that you’ve had ample time to watch The Batman. The Saturday night debut for Saturday, April 16 was THE FOREVER PURGE, which means it is now available to stream at your leisure, or perhaps you still catch an airing on the HBO channel.

This dystopian action/horror film, from 2021 is the fifth in The Purge franchise. You know the basic premise, right? In a dystopian near future, the government has allowed one 12-hour national day of mayhem when all crimes were legalized and given free rein? It was all a theory to allow violence purged from society on that one day thus making for a better society in the long run. Over the course of these movies, some wicked violence has played out. Also, over the course of the franchise, a faction has grown to abolish the Purge program and eventually succeeded in ceasing it. But this fifth installment takes place eight years after the Purge had been abolished. In response to the eight years without a Purge yet another faction grows to reestablish the practice but not just for one day but forever. Eww, nasty!

The New York Post stated, “That idea was fun once, maybe even twice, but by the fifth outing the formula has given way to preachiness and predictability.” Though sadly, it does seem to fit our political times, yeah? In any case, by the time any series hits its fifth installment, it is only catering to the true fans. In this case, it is fans of action/horror, near future societal decay and violence just for the hell of it. The Los Angeles Times says, “Watching these violent events unfold feels just a bit too plausible, but DeMonaco and Gout cook up such delicious comeuppance that you can’t help but indulge in the pleasure of revenge, even if the terrors and pleasures are incredibly fraught.” Rotten Tomatoes summed it up this way – 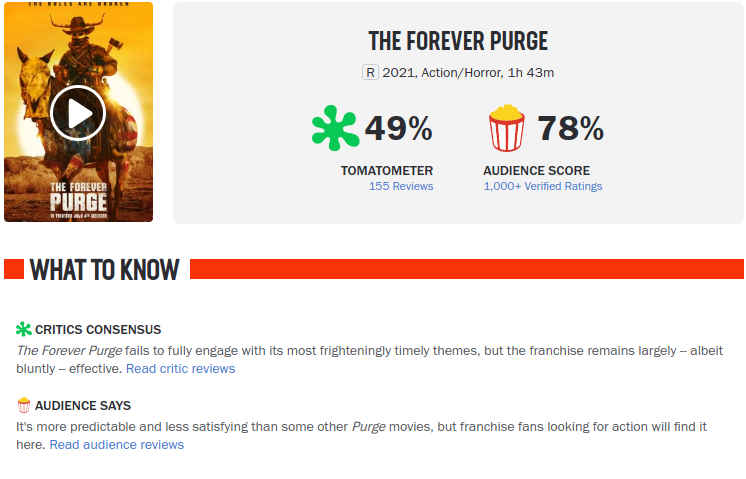 So, what do you say? Still a relevant social commentary of the day or just good slasher fun or a bit of both? You tell us. Seek out THE FOREVER PURGE on HBO & HBO Max if you’re game.