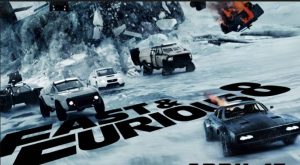 HBOWatch Editors were not able to line-up a writer to review the eighth movie in the Fast & Furious franchise, entitled The Fate of the Furious, but that doesn’t mean that we don’t want to draw your attention to it. Screeech! Put on the breaks and skid to a stop – are people getting tired of the franchise? Don’t forget it started back in 2000.

But it has become Universal’s top franchise. Its top installment was Furious 7 with a worldwide box office take of $1.5 billion with this latest installment making $1.2B. A slight drop in sales, but still #9 is coming in 2020. Here is how HBO describes The Fate of the Furious now appearing on HBO’s platforms – For Dom Toretto (Vin Diesel), life has always been about family…until he’s forced to turn his back on his high-octane clan in this eighth exhilarating installment in the “Fast & the Furious” series. It is non-stop action from start to finish as Dom’s former team mobilizes to stop him after he leaves them in the lurch to join up with a notorious cyberterrorist. Co-starring Dwayne Johnson, Jason Statham, Michelle Rodriguez, Tyrese Gibson, Chris “Ludacris” Bridges with Kurt Russell and Charlize Theron. Directed by F. Gary Gray; written by Chris Morgan, based on characters created by Gary Scott Thompson.

What that doesn’t tell you is that this flick, running 2 hours & 16 minutes, does not only have some of the fastest and slickest cars around but it also sports a nuclear sub, infrared homing missiles and oversized harpoons! Add Charlize Theron and Helen Mirren to mix it up with the standard crew and you got yourself some action.

So does the team hang together and do alright without the late Paul Walker? Are the cars, stunts and crashes bigger, “badder” and better? And is that whole chasing down a submarine on the Arctic ice to far-fetched or just out-&-out cool? A lot of critics seemed to think that the eighth installment did alright. Here is Rotten Tomatoes score.

He is your opportunity to watch it again or catch it for the first time. It debuted SATURDAY, JANUARY 13 on HBO and can be seen on the channels & streaming sites.