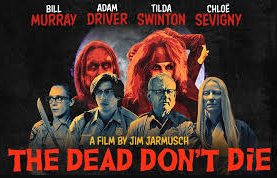 We approach another Saturday night and another HBO theatrical movie premiere. This time around we find that the horror genre just doesn’t die just because Halloween is over as THE DEAD DON’T DIE debuts. The horror trope utilized in this one is, you guessed it, zombies. Now there have been plenty of zombie movies, even ones that skew on a humorous bent like Brain Dead, Night of the Creeps and Shaun of the Dead, and plenty more. Well, THE DEAD DON’T DIE falls into that category also. It is a horror-comedy, but what makes this one stand out at all from the rest? 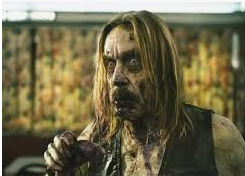 Jim Jarmusch. He is one of the masters on the independent filmmaker scene since the 1980s. It is said his style is more mood and character development on a slow burn than fast-paced plot progression. In 2019 he put that style to work on this, his first horror film. So, if you appreciate his style you might like the movie on hand.

The movie, at 103 minutes, stars and features some names you are sure to recognize. There is Bill Murray, Adam Driver (HBO’s GIRLS), Tilda Swinton, Chloë Sevigny (HBO’s BIG LOVE), Steve Buscemi (HBO’s BOARDWALK EMPIRE), Danny Glover, Rosie Perez, Iggy Pop (pictured), Sara Driver, RZA, Carol Kane, Selena Gomez, and Tom Waits. Now, I’m only going by the trailer to base my opinion on here, but the master of wry & dry Murray sets the tone for this picture, and going toe-to-toe with him is Driver. If you are not down with that type of delivery then this movie won’t click with you. It is strongly evident in the trailer that we will slip in here right about now.

One key point to a zombie movie is always what brings them about. It seems that ‘polar fracking’ has caused the earth to spin out of its usual rotation, throwing things off-kilter. When deaths are reported, Sherrif Cliff Robertson (Murray) & Officer Ronnie Peterson (Driver) are called out. No doubt they will face the zombies head-on and no doubt a cemetery will be a frequented locale. Zombie movies also pass on, directly or indirectly, social commentary and what Jarmusch decides to leave viewers with is unclear, so check it out to find out. Either way, have fun with it. TO offer a clue has to how good or bad it is, as always, we leave you with an RT rating –

Note the time change for this debut. THE DEAD DON’T DIE premieres on HBO Saturday, November 07 at 6:10pm and will upload to HBO & HBO Max.